Here, I would like to introduce the details about Amanoiwatate Shrine which is located on the mountainside in Nara prefecture.
This is the 3rd “Demon Slayer” Real life Locations on the list. 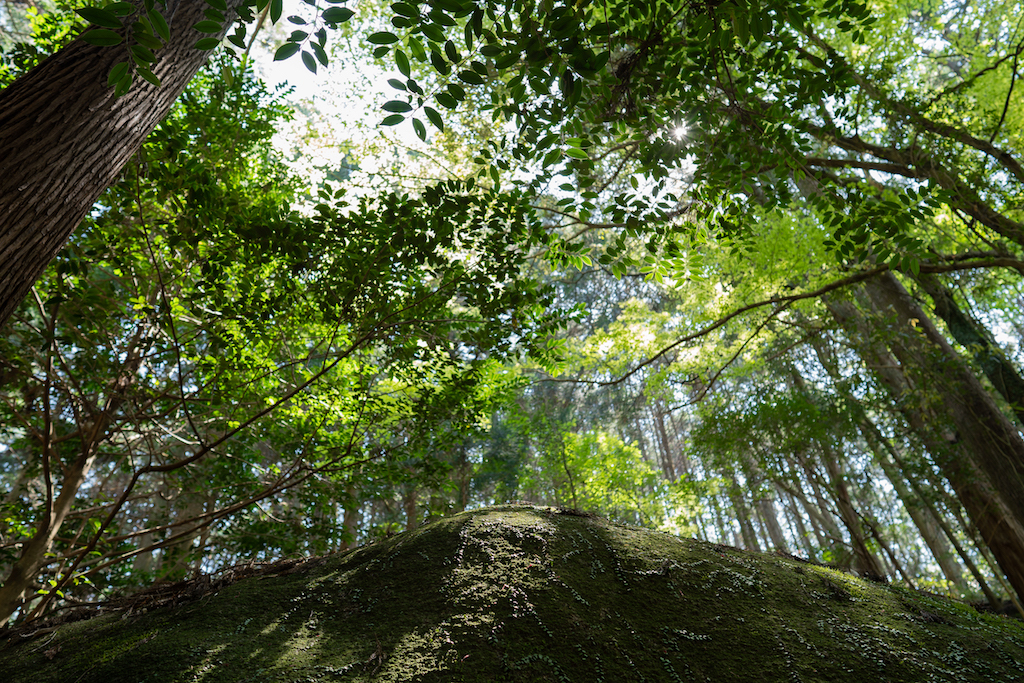 Why Is It Real life Locations?

Amanoiwatate shrine have become very famous real life location of Demon Slayer because there is the big rock that is very similar to the one in the story. The main character, Tanjiro broke the rock in two during the fight against Sabito right before the final selection.
It became popular place from the time (Summer 2019) the rock (itto rock) appeared in Demon Slayer. Some people take a picture behaving like swinging the sword in front of the rock, and others take a picture wearing the costume of the characters.

What Is the Highlight of Amanoiwatate Shrine?

Amanoiwatate shrine is a shrine where the giant rock itself is a “god” instead of the so-called “main shrine” building besides having a small hall of worship. This giant rock is called “Iwakura 磐座” in Japanese.
It is an old shrine that retains the form of rituals from ancient times. By the way, the building for Noh theater used to be existed separately, but it had been relocated to Yagyu-Yasaka Shrine.

“Iwakura” at Amanoiwatate shrine are 4 in total. They are front board (前伏盤 maefuseiwa), another front board (前立盤 maetateiwa), rear stand (後立盤 atotateiwa), drawstring rock (きんちゃく岩 kinchakuiwa). All of them make you feel the power and the appearance of primitive beliefs that are suitable for calling them “giant rocks”.
Front board (前立盤 maetateiwa) has the shape of a big door, and according to the Japanese mythology, one powerful god named “天手力男命 amanotajikarao” opened the door of “Amanoiwato” which is the gate of the celestial rock cave by his hand. At that time, the door flew and fell to this land. It’s said that the door is exactly the one of four Iwakura (rocks in which kami dwell).

This is the most important spot for Demon Slayer fans indeed!

Like I mentioned earlier, this shape is very similar to the rock in Demon Slayer: the rock is split by Tanjiro when he is fighting against Sabito.

Actually there is a legend reminiscent of scenes of Demon Slayer. According to the legend, Sekishusai-Yagyu who was doing swordsmanship training against a tengu for 3 years, he though he finally killed tengu one night, however, it was actually the rock.
This story seems exactly like the one in Demon Slayer, doesn’t it?

Have you known that there is ice cream called “Itto Rock Ice Cream”!?

They have started serving this menu since May 2020. I’m not sure about the serving period, but you should definitely check it out if you have chance to visit Nara, Japan!

・Where to get on?
Please take the bus bound for [Yagyu (柳生) or Ohjinakamura (邑地中村) or Ishiuchi (石打)] departs from [JR (or Kintetsu) Nara Station].

If you visit the shrine by car, please use Yagyu tourist parking lot.
You need to walk from the parking lot to the shrine for about 15-20 minutes to the west.