Amazake is a type of traditional Japanese sweet drink, and also called as amagayu (sweet porridge) in Japan.
The main material for amazake is either the mixture of koji rice and steamed rice or sake lees (called sake-kasu in Japanese).

Amazake was liked by people in old Japan, the Edo period as “summer energy drink” since amazake is very nutrient-rich drink and good for recovery from fatigue especially when people suffer from the summer heat.

Some rice farmers have been made amazake to expresses gratitude for a harvest, and the custom of offering amazake to the festival remains in some places in Japan today.

There are street stalls which sell hot amazake around the local shrine during the season for Hatsumode, the first visit to a shrine in the year. 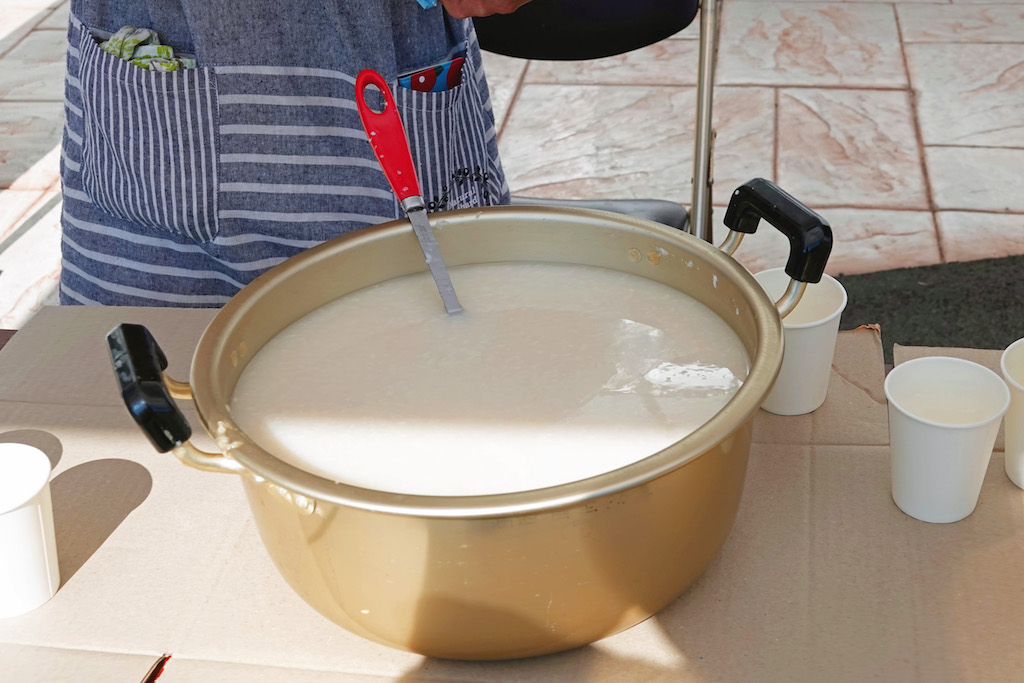 Amazake tastes really sweet no matter which material is used. Also, it has unique flavor of koji rice or sake lees (sake-kasu). The one made from sake lees has subtle smell of alcohol.

The texture is thick, creamy, and smooth. You can feel some rice grains remaining in the drink if it’s made from koji rice and steamed rice.

Amazake made from koji rice and steamed rice doesn’t contain alcohol, while the one made from sake lees contains alcohol a little.

Amazake Made From Koji Rice and Steamed Rice 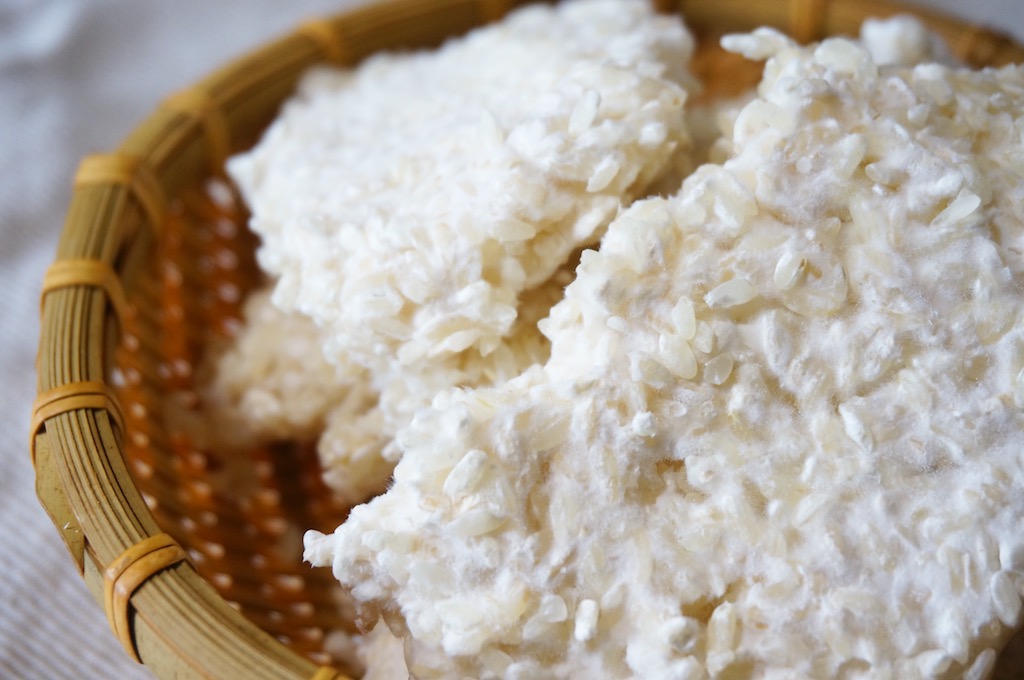 Traditional amazake is made by aging and fermenting the mixture of koji rice and steamed rice. Koji rice is, by the way, made by fermenting steamed rice with koji mold (Aspergillus oryzae) attached.
Since koji rice doesn’t contain alcohol, the alcohol concentration of this type of amazake is 0%.
It’s totally safe to drink for those who are children, pregnant women, breastfeeding women, or can’t drink much.

Interested in learning more about Koji?
What Is Koji and How Is It Used?

Amazake Made From Sake Lees 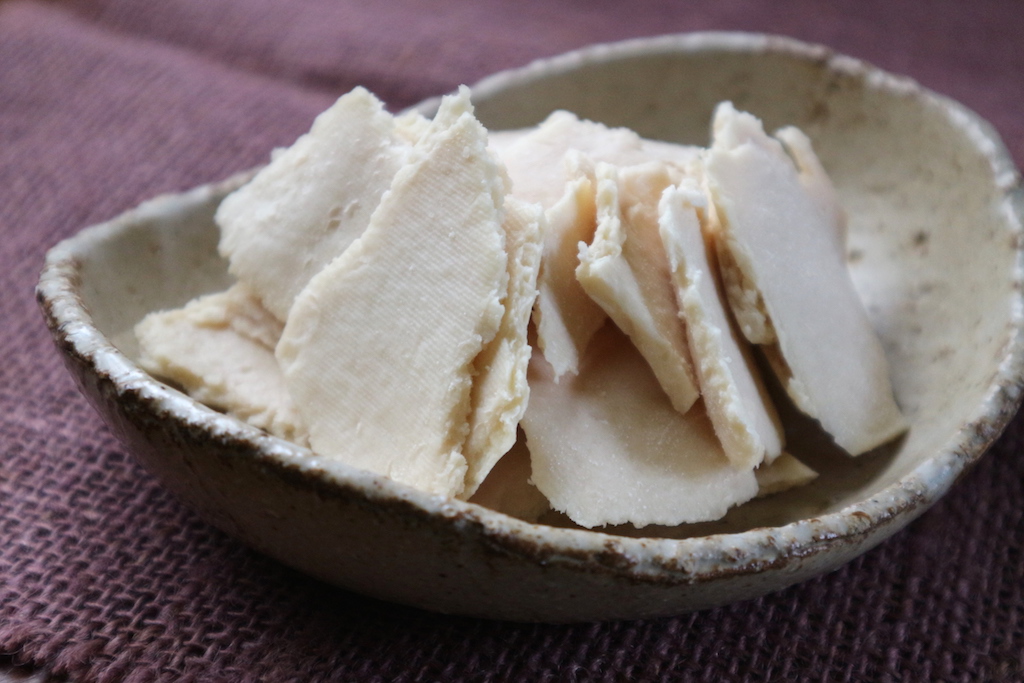 This type of amazake is made by mixing sake lees*, hot water, and sugar.
The alcohol concentration of sake lees itself is about 6-8%. But, the alcohol is blown off by heating during the manufacturing process, and reduced to about 1%.
That is why this type of amazake on the market is sold as a soft drink category, not as a liquor category, so anyone can buy it.
Although it’s not categorized as liquors, those who are children, pregnant women, breastfeeding women, can’t drink much, or before driving should be careful not to drink too much.

*How Sake Lees Is Made?
In the process of manufacturing sake, there is unrefined sake (moromi) made by fermenting a mixture of shubo (yeast mash), koji rice, steamed rice, and water. Finally unrefined sake (moromi) is wrapped in a cloth and squeezed while applying pressure. Liquid made by pressing is sake, and the remaining residue is sake lees.

How Amazake Is Made?

Let’s take a look at the details of how amazake is made.

Amazake Made From Koji Rice and Steamed Rice

Step3. Wait for about 8 hours. Starch contained in rice and koji rice are converted into sugar by the action of an enzyme called amylase derived from Aspergillus (koji mold).

Like this, you can feel natural sweetness from amazake made by this method. There are a lot of amazake without added sugar on the market, while there are some of them with a little sugar added. 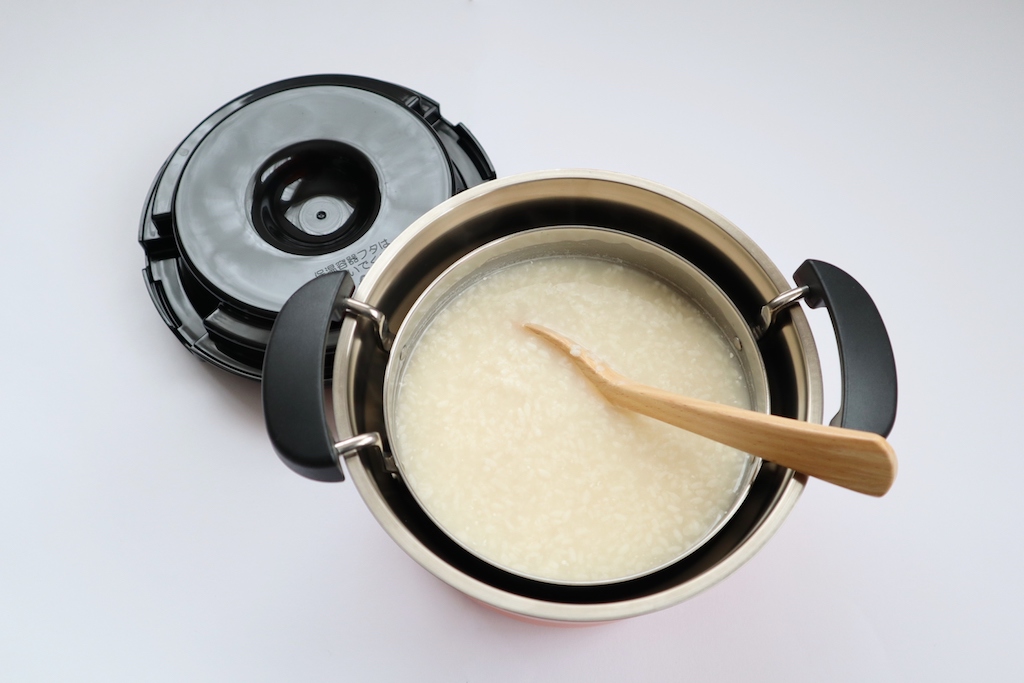 Amazake Made From Sake Lees

Step1. Heat the mixture of water and sake lees*.

*Instead of sake lees, mirin (Japanese sweet seasoning) lees is also used in some cases.

Unlike the one made from koji rice, this type of amazake often contains a lot of sugar. So you should be careful on your amount of drinking, otherwise you might take too much calories from it. 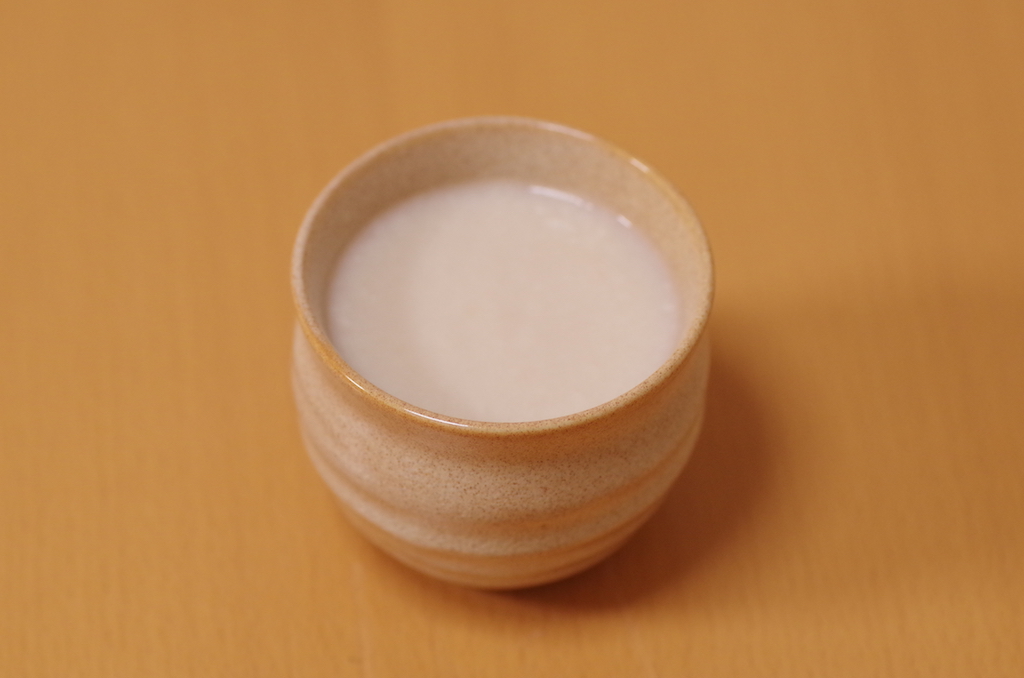 ▲Amazake Made from Sake Lees

What Is Lactic Acid Fermented Amazake?

Lactic acid fermented amazake is made by adding lactic acid bacteria in the process of fermenting a mixture of koji rice and rice porridge.

The sourness produced by lactic acid bacteria makes the unique scent of koji lighter and refresh the sweet taste. It’s easier to drink it even for people who are not good at very sweet taste of normal amazake.
The lactic acid bacteria that is chosen for adding amazake is usually the one that doesn’t make gas or improves the taste and aroma.

Also, there is some lactic acid fermented amazake containing lactic acid that reaches the intestines alive.
You can expect health benefits from it, but sourness may increase during refrigerated storage because this kind of amazake is usually produced with non-thermal sterilization method.

How Do You Drink Amazake? 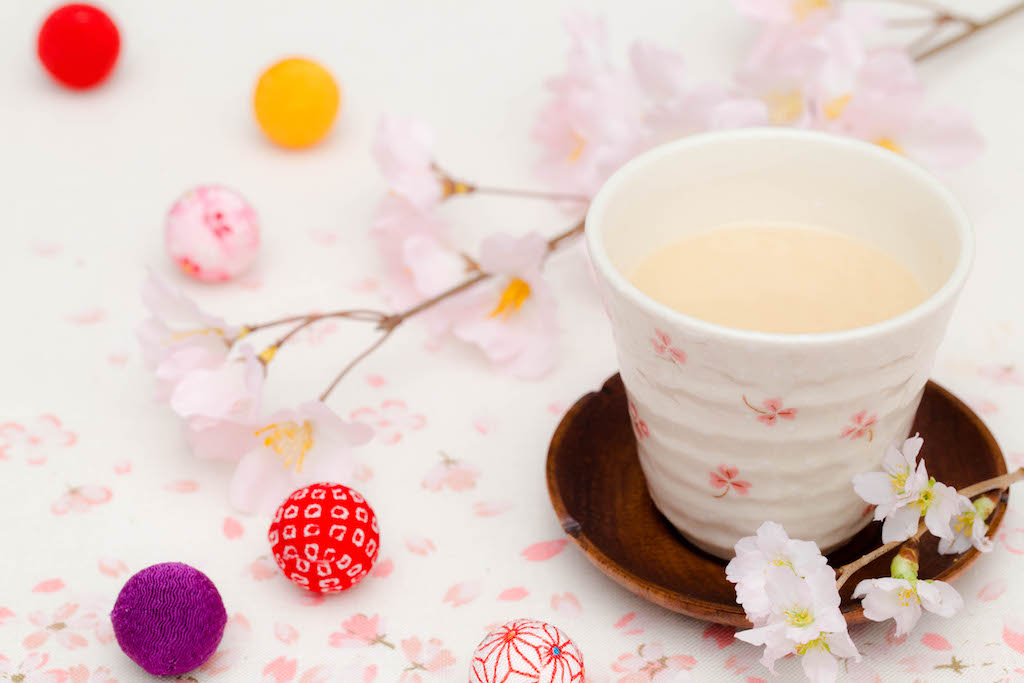 Speaking of amazake, people in Japan think of drinking it after warm up. Probably it’s because hot amazake is often sold at street stalls during winter season. Especially on days around New Year in Japan, you will often see them near the local shrine. 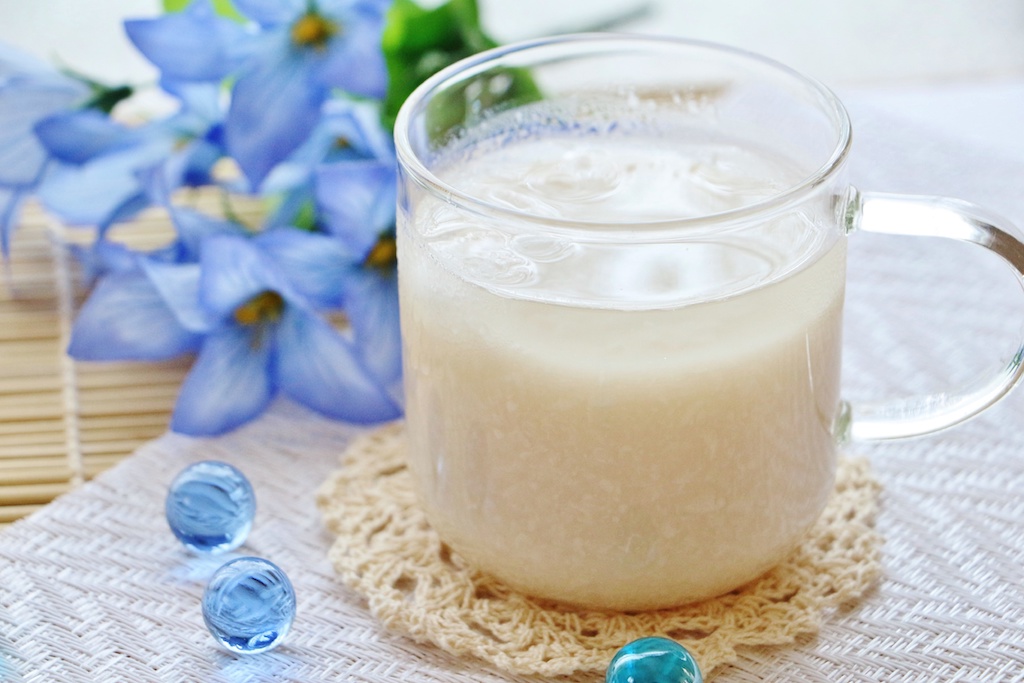 Drinking cold amazake has gradually penetrated in Japan lately, although most of people still prefer hot one. I would say iced amazake is easier to drink because the unique flavor of koji and the sweetness will be lighter if it’s cold.

Both heated and iced amazake can be purchased at grocery stores, convenience stores, and even vending machines. Also, there are instant amazake that you can drink by just pouring hot water.

You can enjoy natural sweetness by making smoothie with amazake (made form koji rice) and fresh fruits. 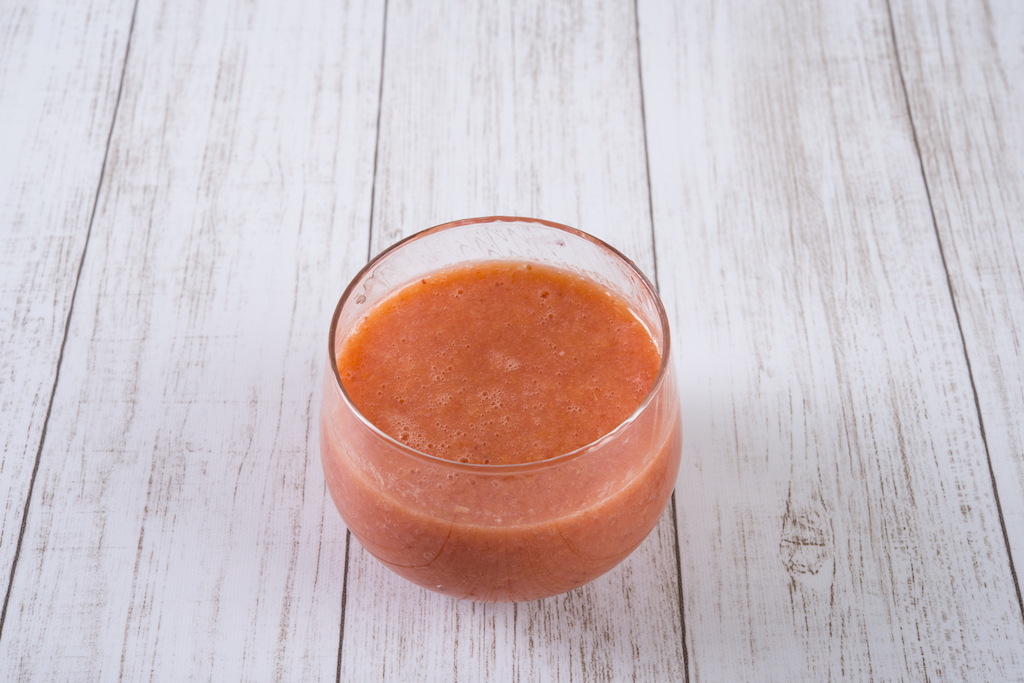 You can add amazake to soup dishes, stews, pickles, and salad dressing so that it gives umami (delicious taste), sweetness, and great flavor. 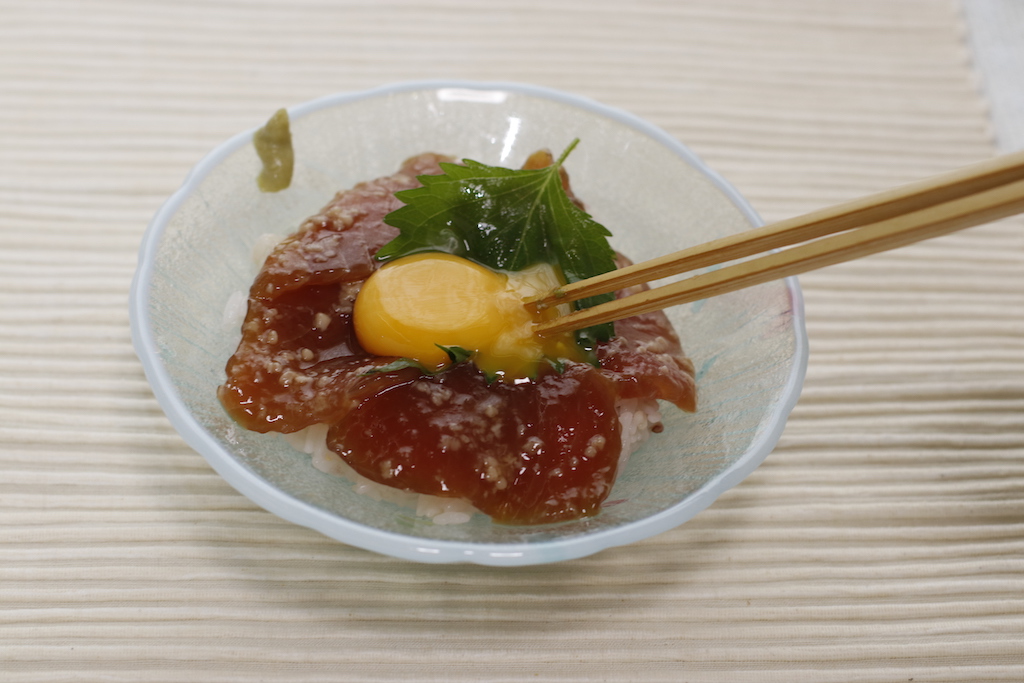 You can use amazake when making various kind of desserts such as pudding, jelly, pound cake, muffins, etc. Those will be sweet and tasty even without butter and sugar. 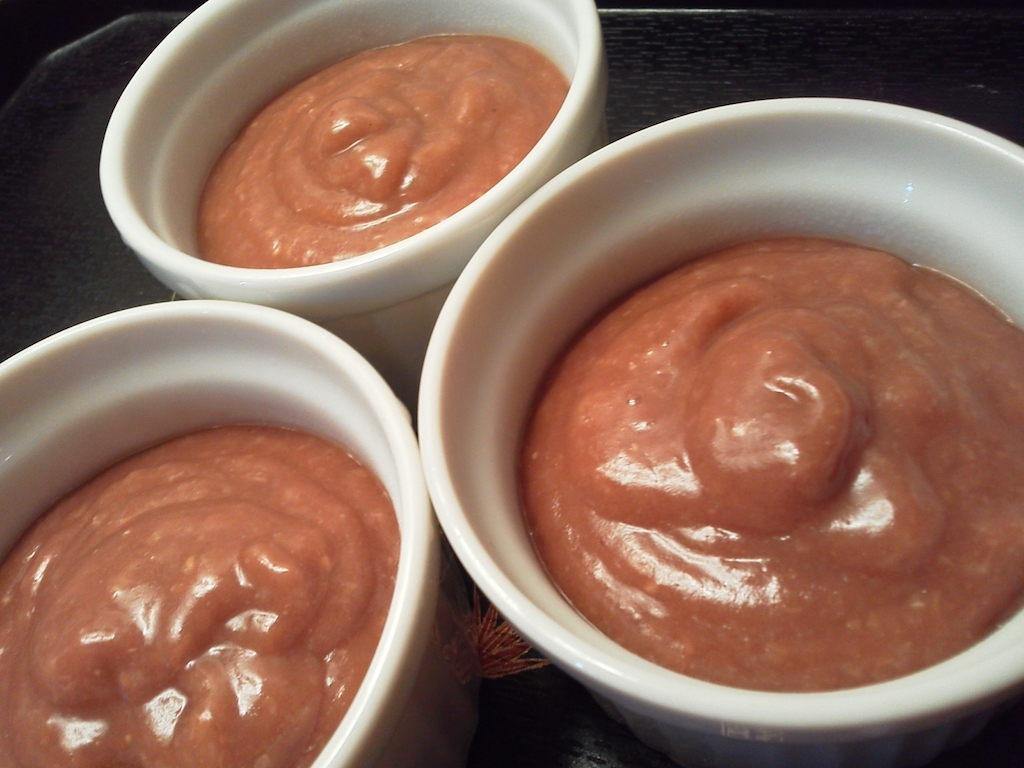 Below you will find the nutrition information for a 3.5 oz (100g) of amazake:

What Are the Benefits of Drinking Amazake

Amazake is a Japanese superfood, and known as nutrient-rich food.
The one made from koji rice contains abundant nutrients such as glucose, amino acid, and vitamins. You can expect to improve immunity by taking this type of amazake.

Also, amazake contains a lot of oligosaccharide and dietary fiber, so it could improve intestinal environment. You should probably take it when your stomach or skin is not feeling well. Amazake is sweet, delicious, and nutrient-dense Japanese superfood!!
Please try it if you have the chance!