But, what is the clear difference between these? 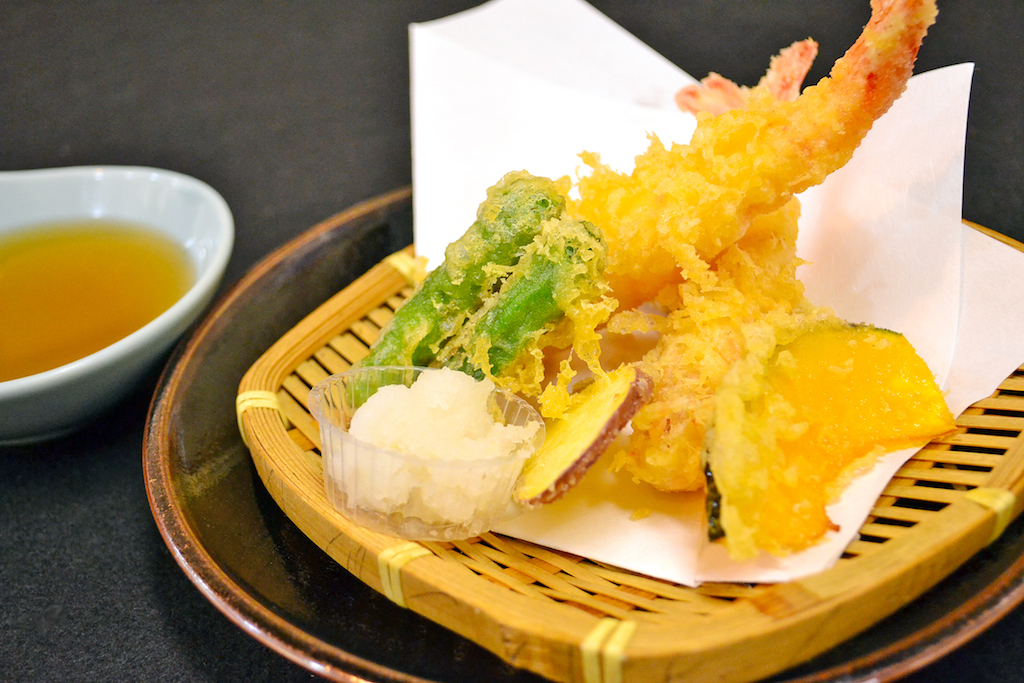 When making tempura, you don’t need to season the ingredients in advance. It’s because tempura involves enjoying the natural tastes of the ingredients.

However, there is exception. Tori-ten is chicken tempura, and usually it’s seasoned beforehand. To make tori-ten, you season the chicken with soy sauce, ginger, garlic, etc. Then, put tempura batter and fry it in oil. Tori-ten seems to be similar to karaage (fried chicken) since it’s seasoned in advance. But, the difference is that tori-ten is generally made with chicken breast, while karaage is often made with chicken thigh. 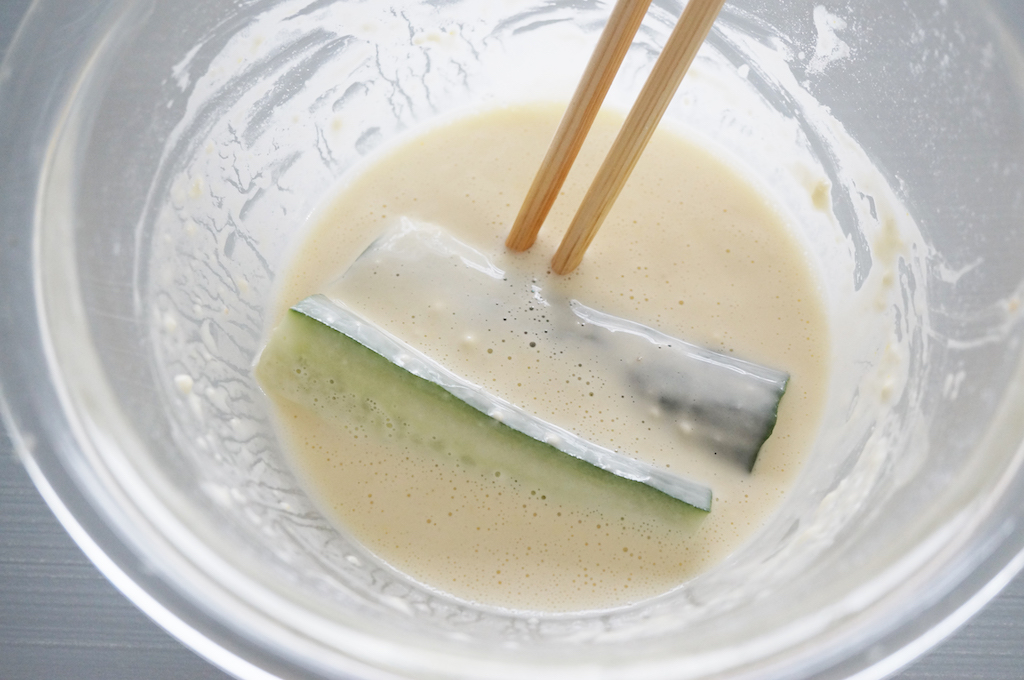 Tempura is soaked in a batter mainly made of all-purpose flour and then fried. The tempura batter can be made with only water and all-purpose flour. Potato starch and egg are sometimes added.
8 Ways to Make Tempura Batter (Recipe) 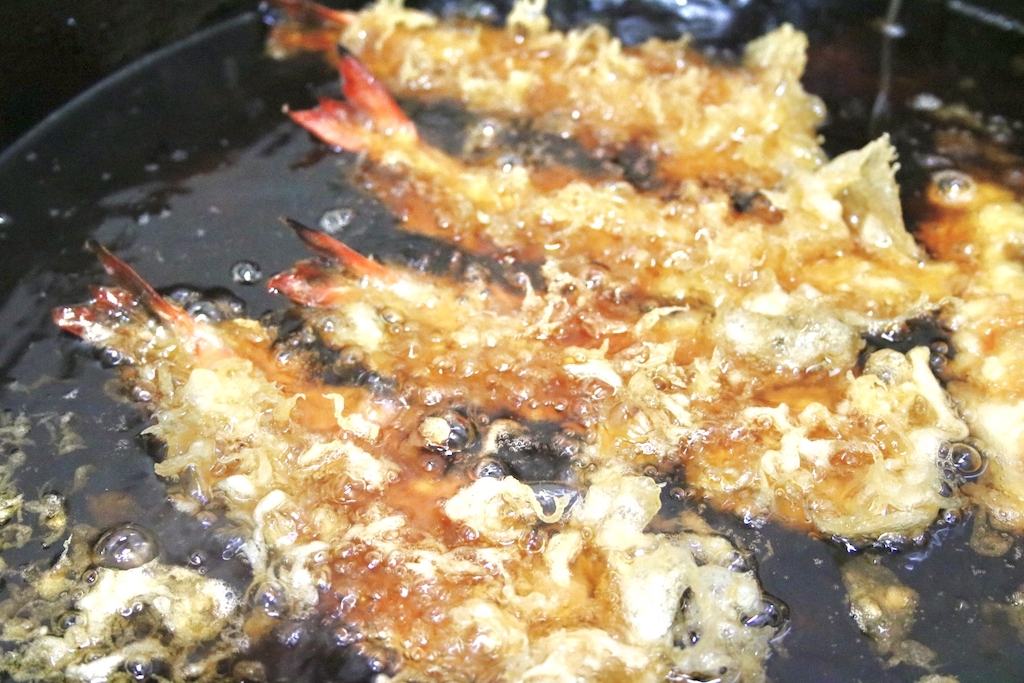 In ordinary households, people use vegetable oil most of the time. Sesame oil is often used at restaurants that specialize tempura. 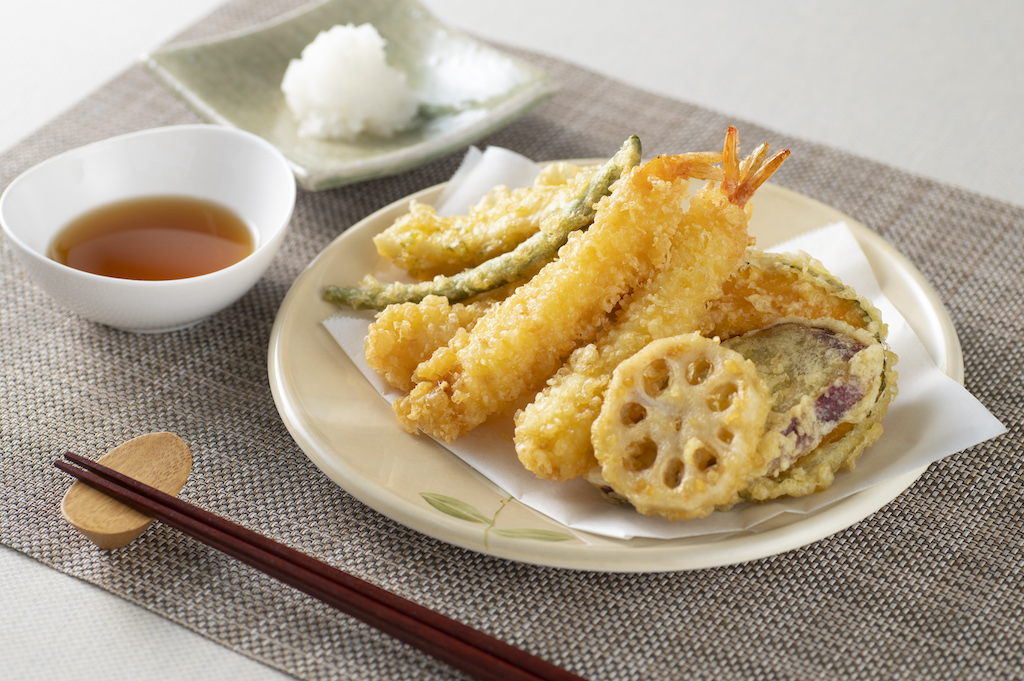 Typically Japanese people eat tempura by dipping it in tentsuyu (thin dipping sauce for tempura made of dashi, soy sauce, and mirin). Also, grated daikon will be great condiment for it. You can also eat it with soy sauce or salt.

By the way, tempura is often served with noodle dishes such as soba and udon. Also, ten-don, the bowl of rice and tempura is popular dish.

Is Fritter the Same As Tempura? 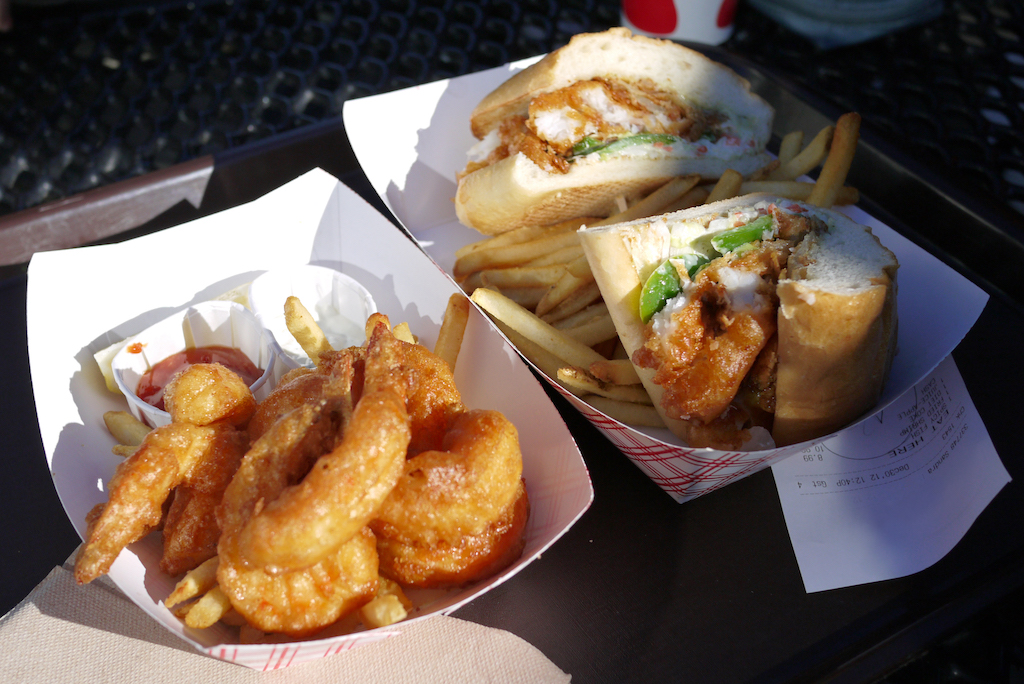 You could say fritters are Western style of tempura, and it’s similar to real tempura. But the batter is different. Fritter batter is made by mixing meringue, milk and egg yolk with flour. It seems that sugar may be added to make it sweeter.

Additionally, the ingredients for fritter could be very different from tempura. You can use fruits such as apple, pineapple, and banana for fritter, while they are rarely seen in Japanese tempura. Fish such as horse mackerel, mackerel, squid, and octopus are also popular ingredients for karaage.

Tempura is usually not seasoned in advance, but karaage basically needs seasoning before deep-frying. You should soak for at least 15 minutes to let the taste soak in.

The taste of the marinade can be anything you like. The typical flavor of Japanese karaage is made with soy sauce, sake, and ginger. Garlic and other seasonings (mentsuyu, oyster sauce, miso paste, spicy seasoning, etc) are added as you like. Karaage is sprinkled with all-purpose flour or potato starch and then fried. You can also use rice flour instead of these, or can mix several types of flour. Unlike tempura, no water is added.

The key of making crispy karaage is to sprinkle a thin layer of flour.

You use vegetable oil, don’t use sesame oil. 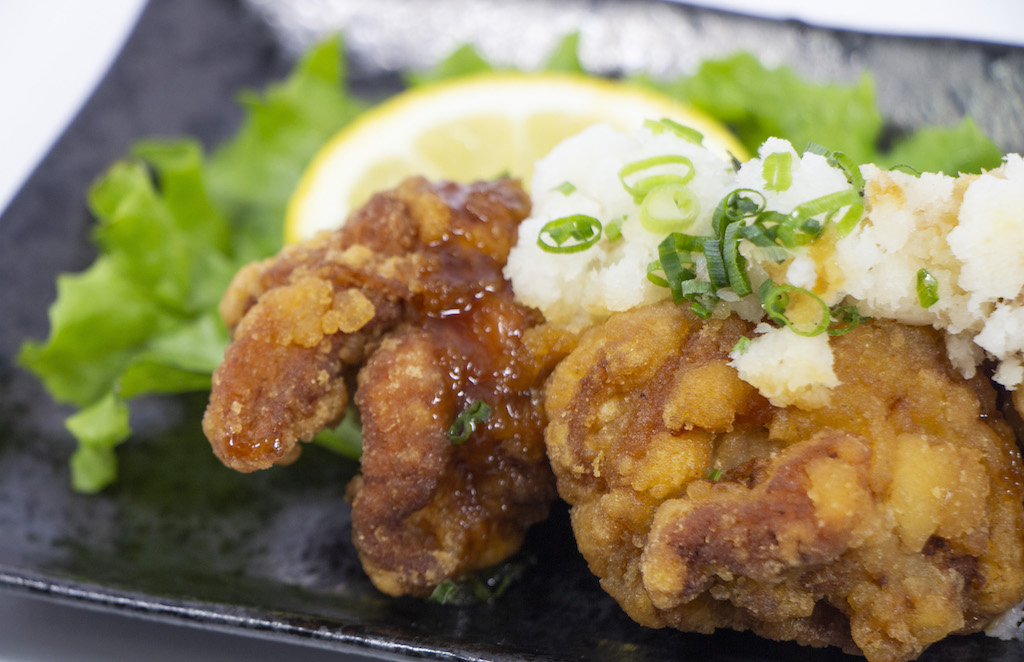 It has a strong flavor already, so people often eat it as it is. But, you may enjoy various toppings with karaage. Putting mayonnaise is one of the most popular topping.

Besides mayonnaise, some people like to coat karaage with sweet and spicy sauce or eat it with a refreshing condiment (ponzu sauce + green onino + grated daikon).

Is Tatsuta-age the Same As Kara-age? Unlike tempura and karaage, the name of katsu changes depending on the ingredients. I am introducing 4 typical types of katsu here. For example, ton-katsu (pork cutlet), gyu-katsu (beef cutlet), tori-katsu (chicken cutlet), and hamu-katsu (ham cutlet). It seems like this is the name used for meat-based materials. There is no clear definition. But, when the material for the katsu is seafood, it becomes “something-furai” most of the time. For example, ebi-furai (fried shrimp), ika-furai (fried squid), and aji-furai (fried horse mackerel). 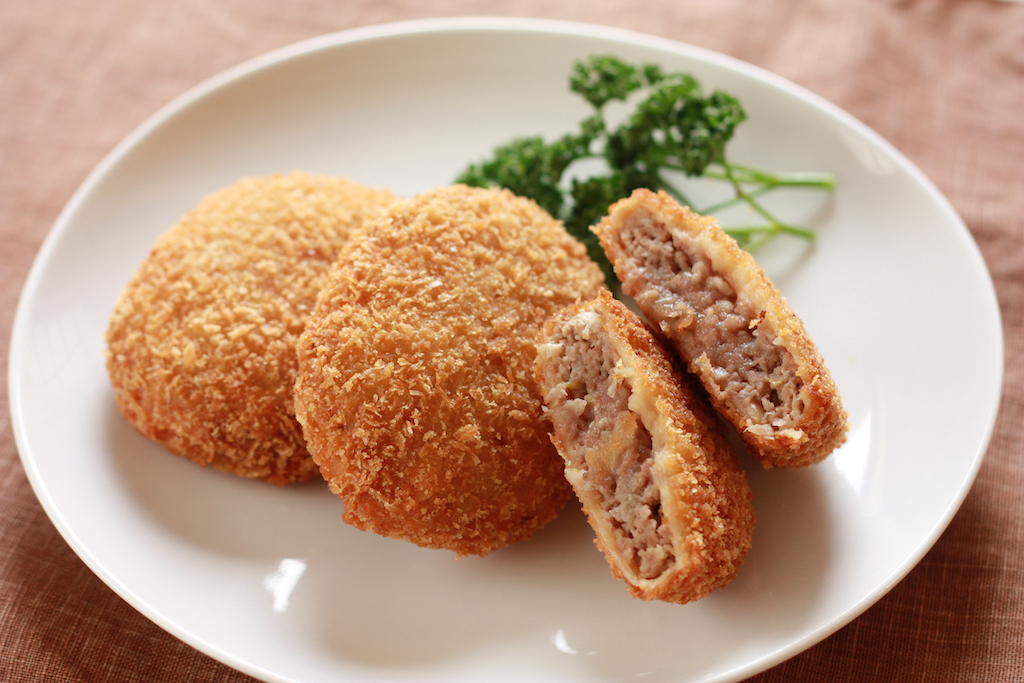 The basic material is like a hamburger patties made by kneading minced beef and pork and vegetables such as cabbage. The one that is sprinkled with bread crumbs and fried is called menchi-katsu. The crushed potatoes that are rolled and fried are called korokke in Japan. You can add a little minced beef and minced onion to the potato.

Also, there are many types of korokke using the following ingredients in place of potatoes: kabocha korokke, crab cream korokke, etc.

When you are making katsu (including All 4 above), seasoning before frying is very simple. Usually you will only put salt and pepper. 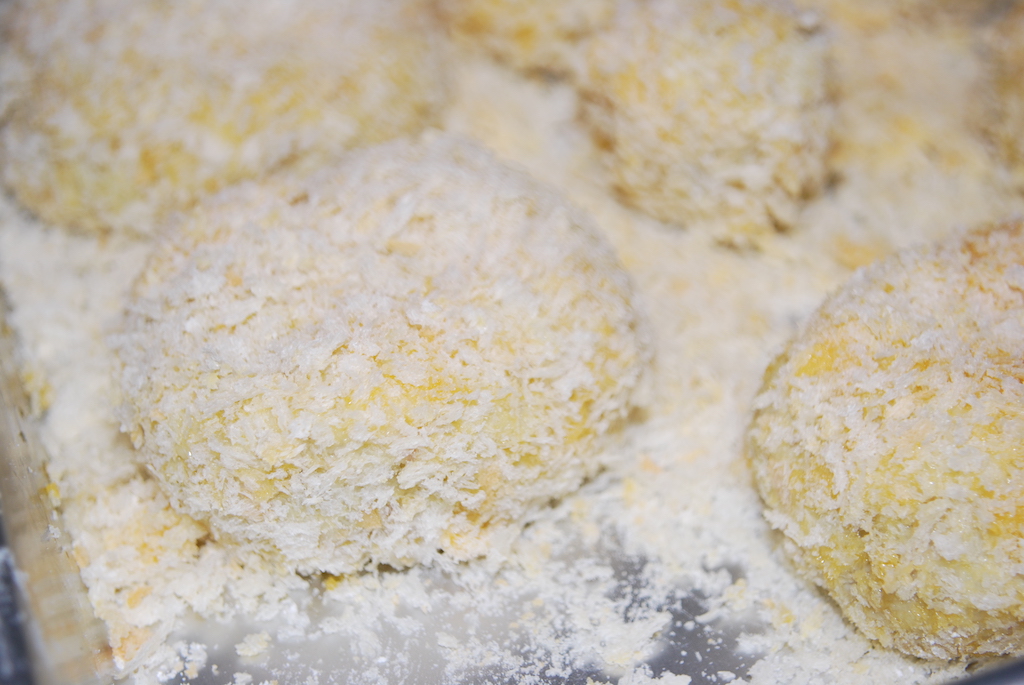 You use vegetable oil, don’t use sesame oil. 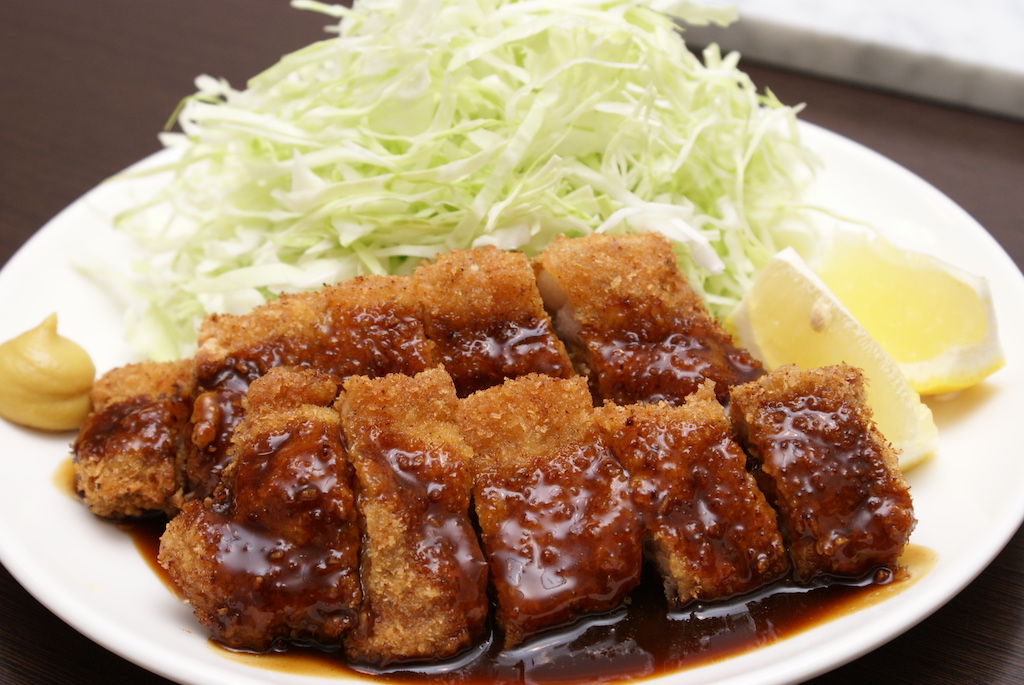 It depends on your taste, but usually Japanese people eat it with sauce. The sauce is very unique Japanese seasoning, and please check below to know about it.
[Ultimate Guide] Different Types of Japanese Sauce (Worcestershire, Chuno, Tonkatsu, and Okonomi Sauce)

Since there are several types of Japanese sauce, some people change the type of sauce depending on what kind of katsu you eat.

In addition to that, some of the katsu above match so well with tartare sauce made from mayonnaise, minced onion, pickles, vinegar, salt, and pepper.

Putting soy sauce can also be your choice. Is Kushi-katsu the Same As Katsu? Have you ever heard of kushi-katsu?
Kushi is skewers, so kushi-katsu means deep-fried skewers. Various small pieces of ingredients are put on a skewer and deep-fried with panko.

There is a kushi-katsu specialty store in Japan where you can order and eat your favorite ingredients. At this type of restaurant, you will eat kushi-katsu dipping in Japanese Worcestershire sauce.