What Is Kombu (Kelp)?

Kombu is a type of seaweed. The word “seaweed” covers a lot of types of Japanese foods as followings:

Kombu is used for making dashi (stock for Japanese dishes) and ingredients in cooking.

Unlike the other type of seaweeds, kombu is dried for a long time in the manufacturing process in order to make it great material for dashi.
Although there are various types of dishes that use kombu as ingredients, using kombu in dashi is extremely familiar usage for Japanese people.

Interested in learning more about Kombu (Kelp)?
What Is Kombu and How Is It Used?

Can I Make Dashi Without Kombu?

The answer is… YES. Let me talk about dashi in Japan just a little here.

Dashi made from the 2 ingredients: kombu (kelp) and dried bonito shavings is often used in various places including luxury restaurants in Japan. There are commercially available dashi granules made from those 2 ingredients as well.
Some of them contain niboshi (dried small sardines) or dried shiitake mushrooms in addition to those. 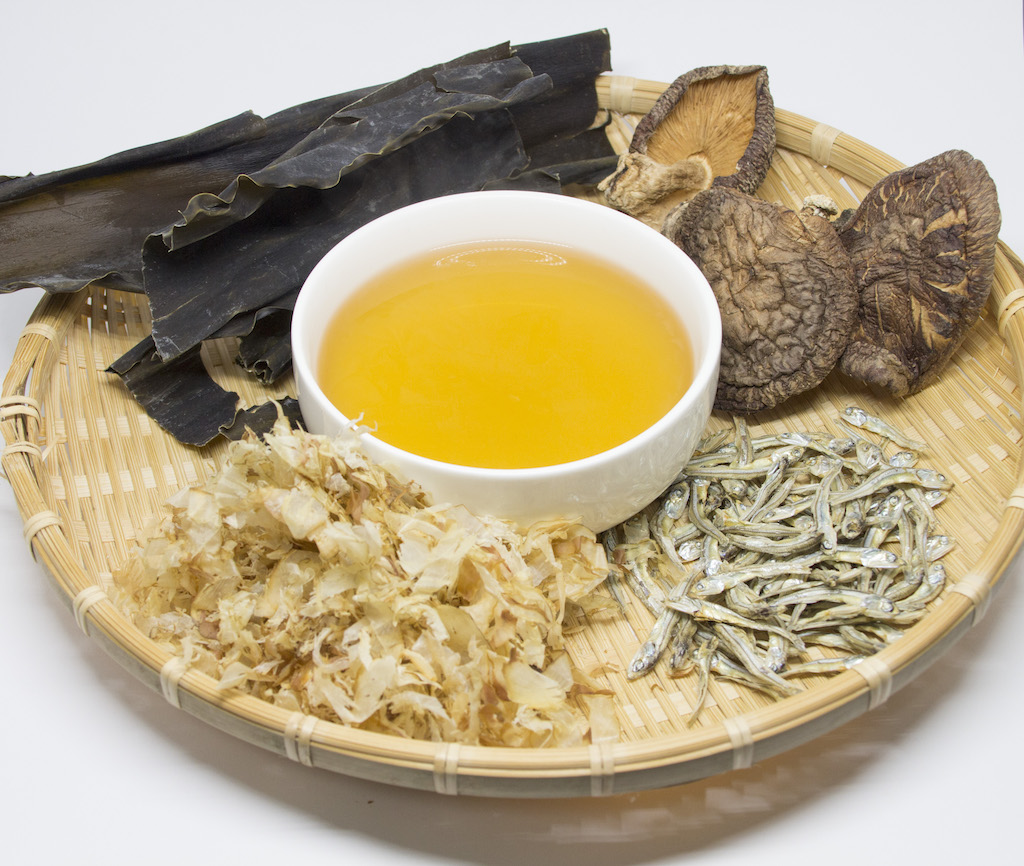 Kombu is actually expensive most of the time, and making dashi from scratch with kombu is taking time and effort.
So, it would be great to know about good substitutes for kombu dashi.

Here, I would like to introduce what to ues if you can’t find any kombu (kelp) when making dashi.
There are 6 best kombu substitutes.

Before going through each one of them, let me talk about the important component contained in kombu. That is called “glutamic acid”. Glutamic acid is a type of amino acid which is also known as umami ingredient.
Kombu contains this glutamic acid abundantly, and that is why using kombu dashi can make the dish even more delicious.

The following 6 substitutes for kombu contain glutamic acid as well, or if not, they do contain other umami components (Inosinic acid / Guanylic acid) instead of that. 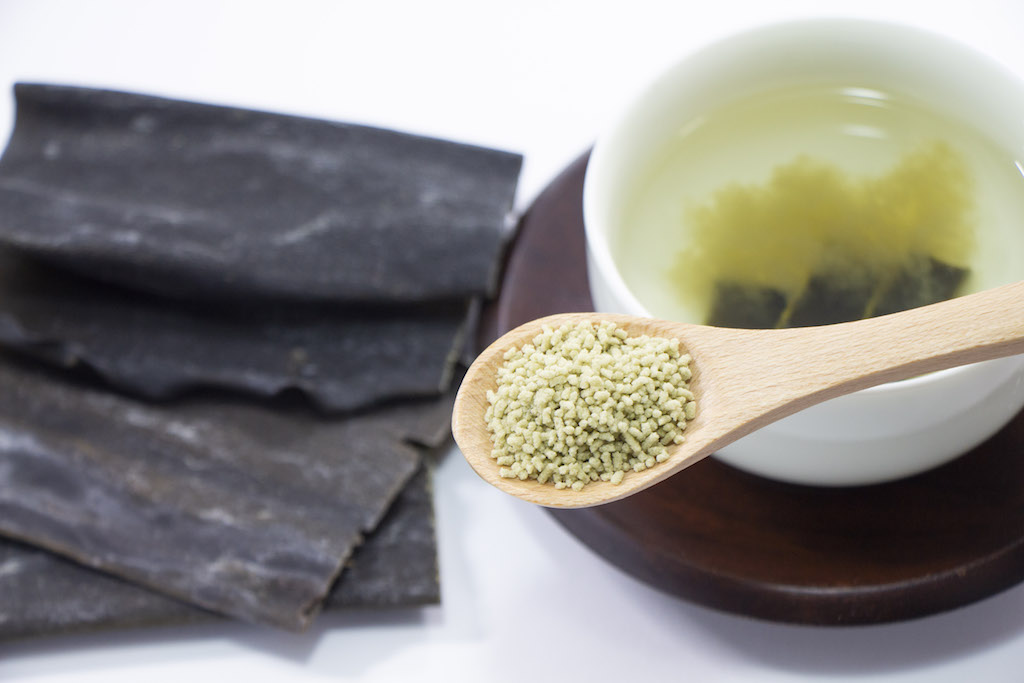 Kombu tea is beverages that are made by pouring hot water into dried, finely chopped or powdered kelp. This kombu powder is supposed to be used for making the tea, but it also can be used as secret ingredient for all kinds of dishes.
It’s made from kombu, so it does contain glutamic acid which gives great umami to the dishes.

Due to the powdery form, it can be preserved long and so convenient. You can get it from Japanese (or Asian) grocery stores or online.

By the way, kombu tea is often sold with the flavor of plum (ume), and kombu tea without any flavor is better to use for cooking. So, please be careful not buying the one with some flavor. 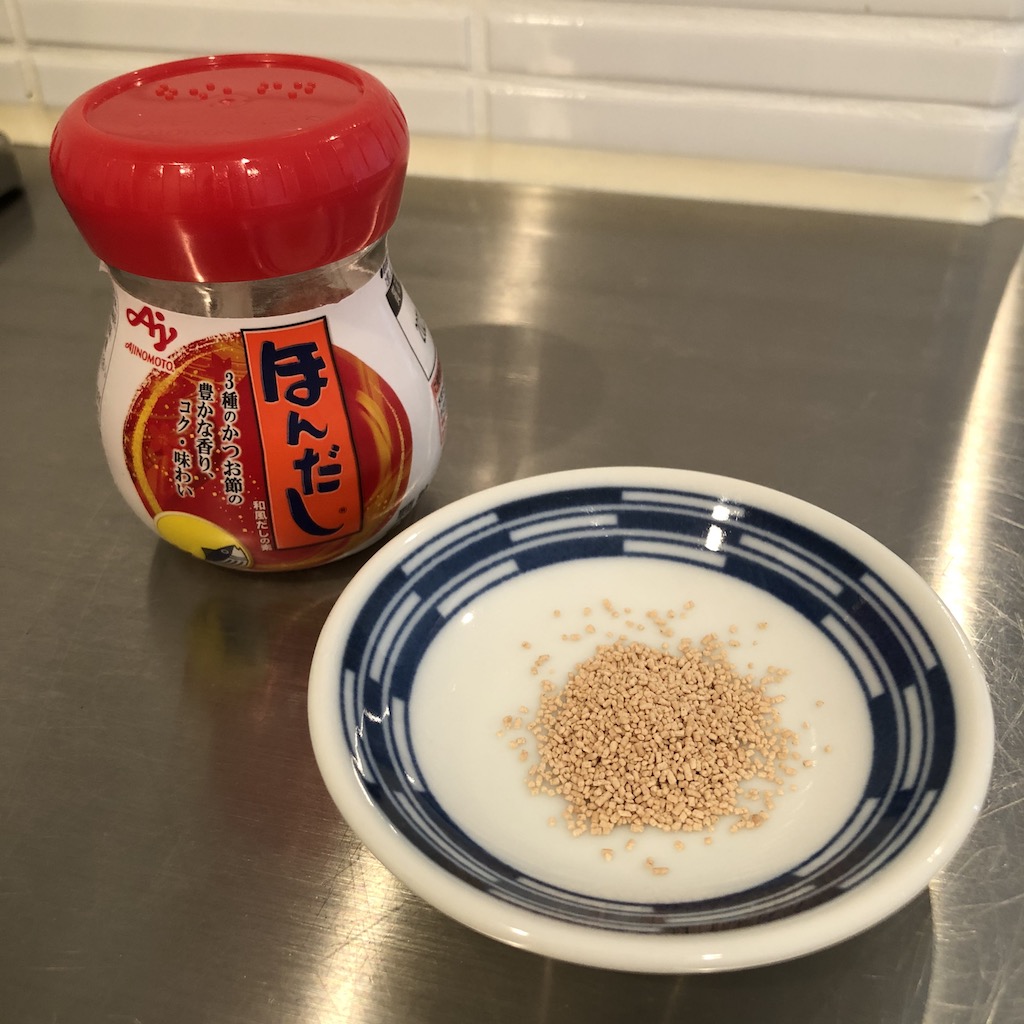 Hondashi is the brand name of dashi granules which is very famous and popular in Japan.
It can be used for all kinds of dishes, for example, miso soup, stews, small pot dishes, mixed rice, etc.

Hondashi is selling various types of dashi granules that are made from dried bonito shavings, kombu, dried small sardines, etc. Some of them are mixed dashi using several ingredients, others specialize in one type of ingredient.

In order to use hondashi as a substitute for kombu dashi, it’s better to buy the one made from kombu. However, other type of hondashi are totally fine to use, and any of them can make the dish delicious enough.

Those granules, by the way, doesn’t contain any seasonings other than dashi, so its versatility is very high and they are excellent substitute. 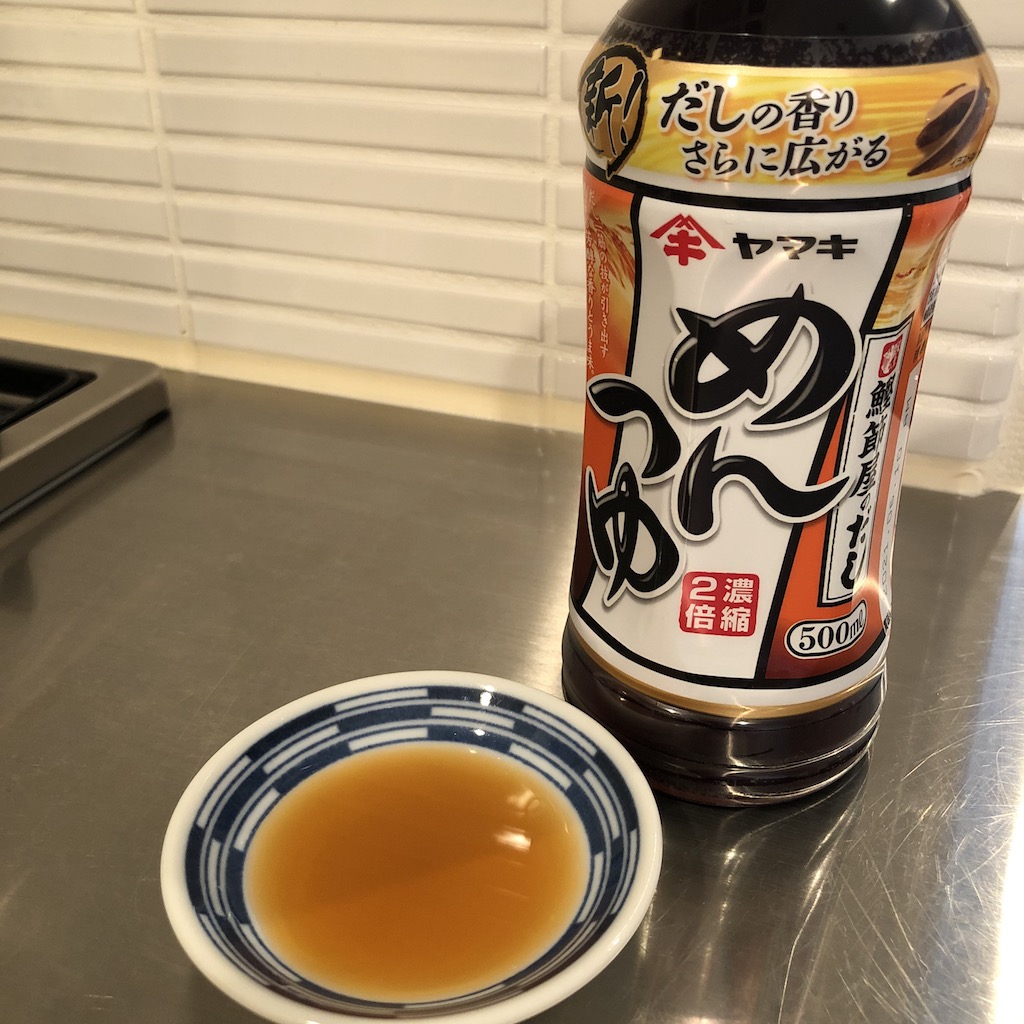 Mentsuyu is commonly used seasoning in Japan which is made from dashi, soy sauce, salt, sugar and so on. It’s very useful when you make the soup of noodle dishes, and it can be great seasoning for various Japanese dishes such as stews.

The type of dashi in mentsuyu can be anything, but normally it’s bonito dashi. Sometimes it contains kombu dashi too.
Probably you should check the list of ingredients on the package, and if it says “kombu”, that’s the best one to buy.
But again, as long as it’s mentsuyu, any type of it can upgrade your dish with great umami. 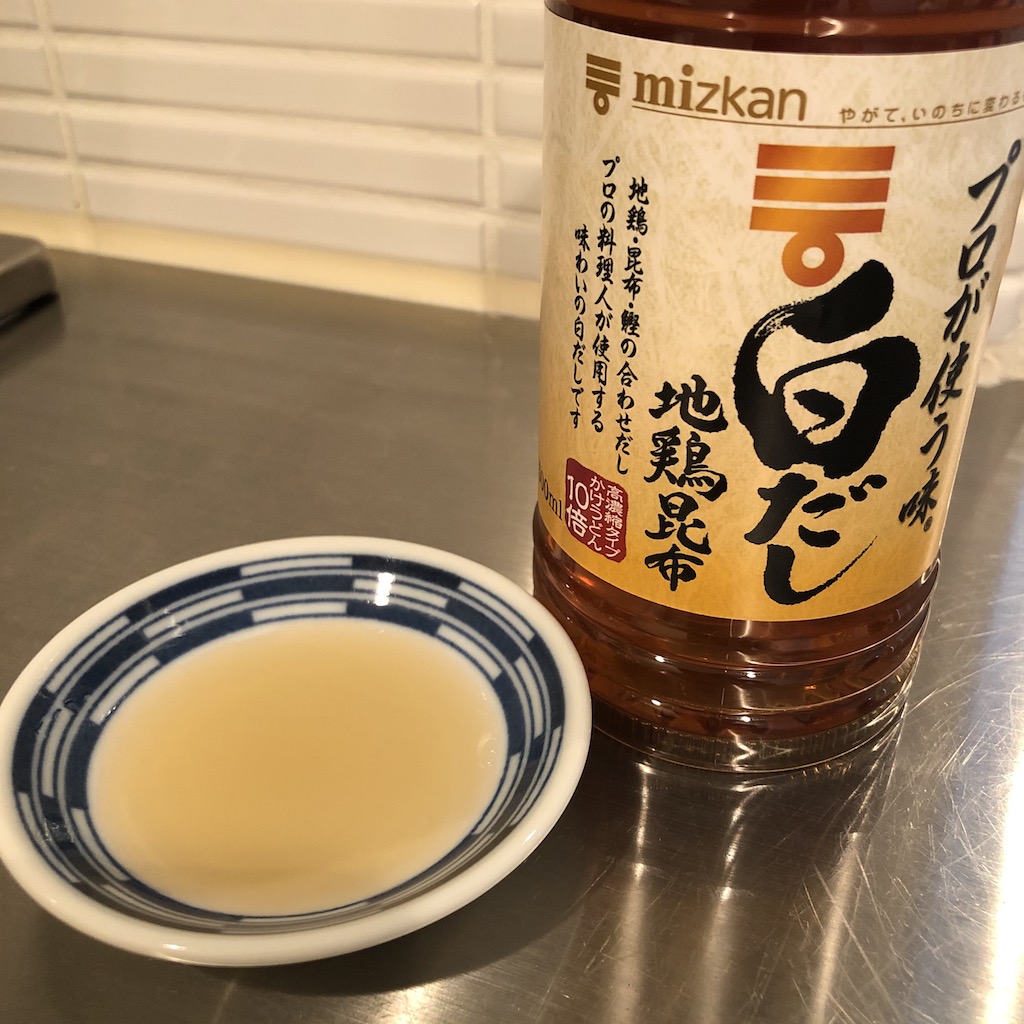 Most importantly, the products I’ve mentioned here: Mentsuyu, Shiro-dashi, and Kombu-tsuyu, they all contain salty taste basically. So, you shouldn’t add them into miso soup or any dishes that is already seasoned with salty taste. If you want to make the soup with mentsuyu, please do that without miso paste. 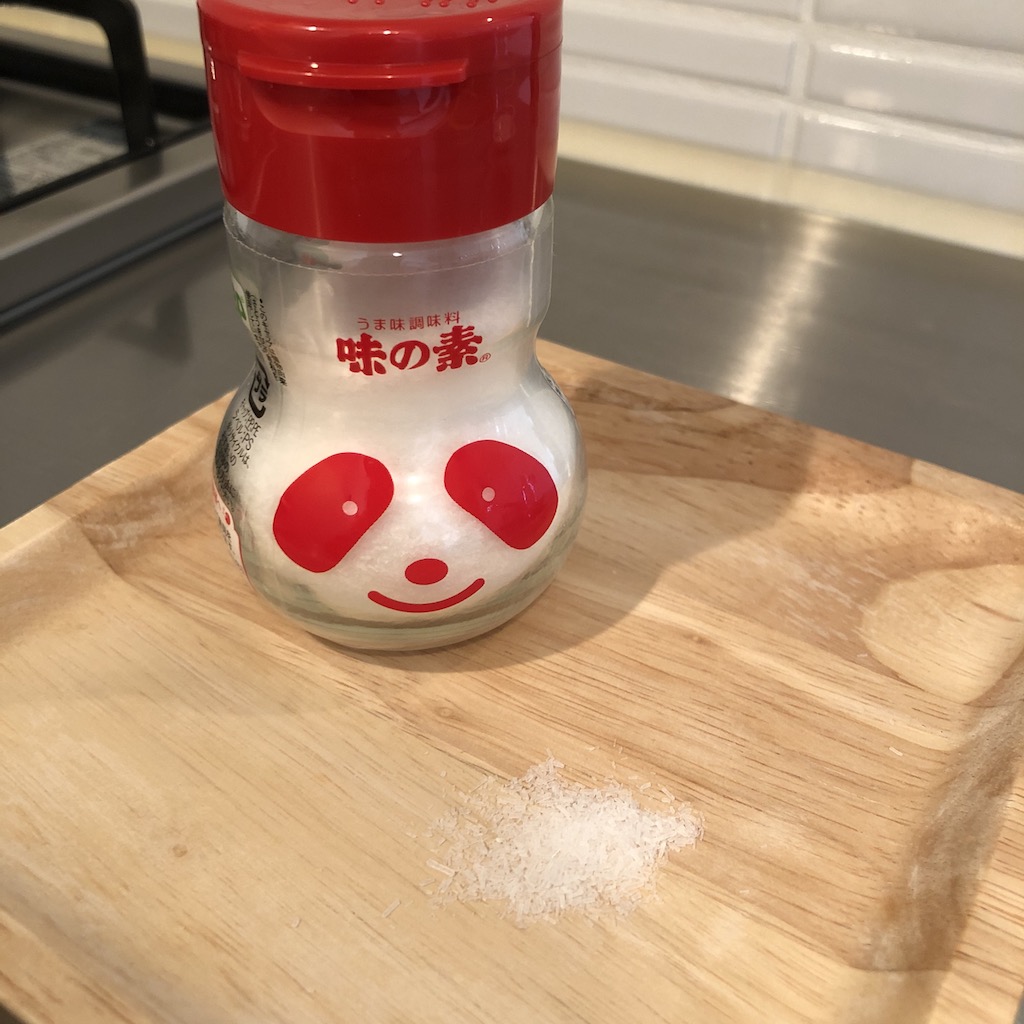 Ajinomoto is also very familiar to Japanese people. The white powder is exactly umami ingredient.
The main ingredient of ajinomoto is monosodium glutaminate which is made form sugarcane. The sugar component is converted to glutamic acid by fermentation.

In order to make ajinomoto, fermented bacteria is put in molasses took from sugarcane, then it’s fermented just like the method of making miso or soy sauce.

At one time, some people prefer not to take ajinomoto in Japan just because the image of ajinomoto as “chemical substances” had been strong.
However, it is a product made by fermentation using natural ingredients and definitely safe to eat.

Ajinomoto doesn’t contain seasonings other than umami component, so it’s neither salty nor sweet.
That’s why you can sprinkle ajinomoto on all kinds of foods (finished foods), for example, soup, salad, pickles, and meat dish to improve their taste.

The last 2 substitutes are for those who want to make substitutes for kombu dashi from scratch instead of just buying seasonings like the above. 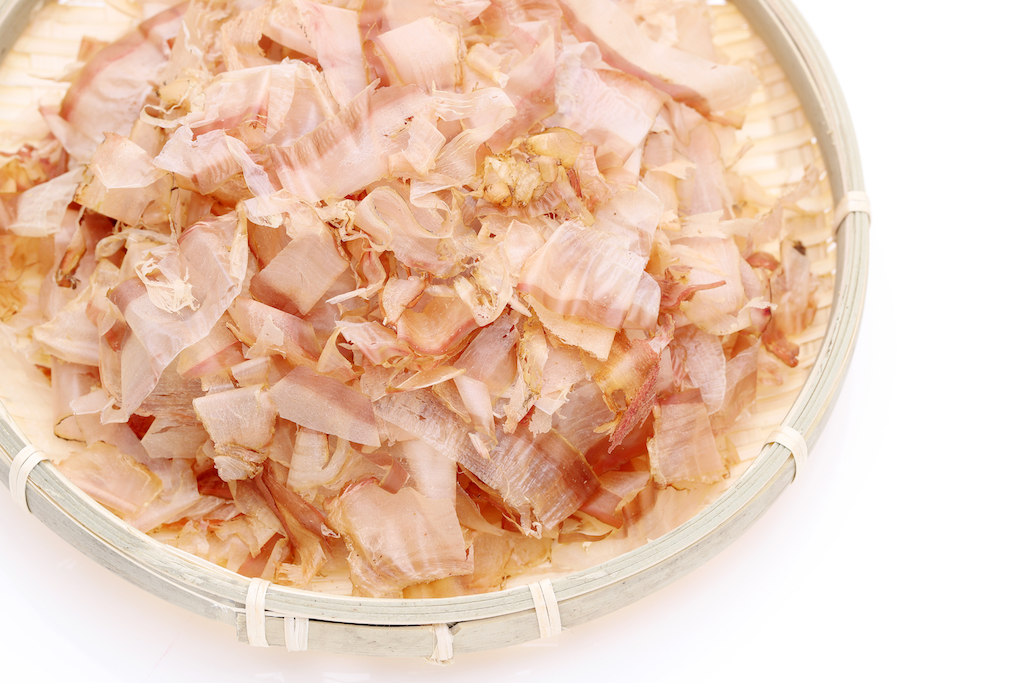 To make bonito soup stock, you need plenty, good quality dried bonito shavings. But there is easier way to make it at home so easy.

The ingredients are just 2: the pack of dried bonito shavings which is commercially available and hot water.
All you need is that putting the dried bonito shavings in a heat resistant container, pouring hot water in there, and wait for only 3 minutes.
After it’s filtered out, you can taste the great soup stock.

Although it doesn’t have the flavor of kombu, you can feel amazing flavor of bonito shavings. Inosinic acid which is umami ingredient in the soup dramatically improves the taste of dishes. 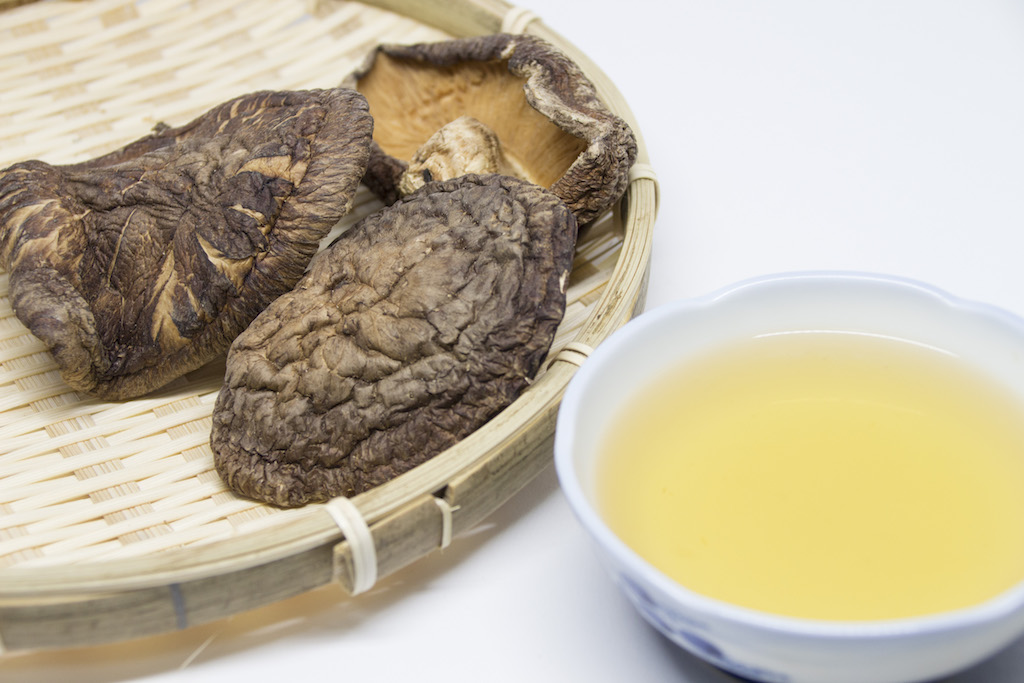 In order to make the soup stock, you should put dried shiitake mushrooms in container with water, and let it rest for 6-12 hours in the refrigerator. The amount of water should be about 0.4 cup (100ml) per 1 mushroom.
The more time you spend, the more delicious and fragrant the soup stock will be.
After removing the dashi stock, you can cut the shiitake mushrooms and use them as ingredients for cooking.

Dried shiitake mushrooms are a little expensive, but the taste and umami are unbelievably nice. So, please try it when you have a chance.

Can I Substitute Wakame for Kombu? 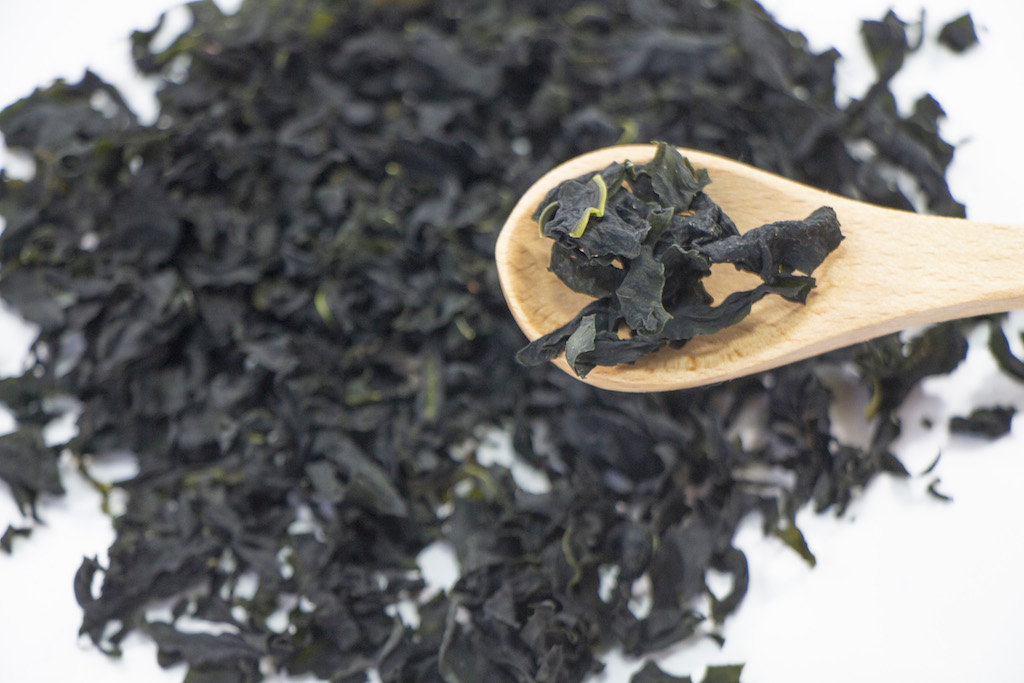 Wakame is a type of seaweed just like kombu.
So, some people might wonder that dried wakame can be good substitute for kombu.

Unfortunately, that’s not true. Check below!

Can You Make Dashi with Wakame?

Even though you soak dried wakame in water overnight to make dashi, the wakame water will be unable to extract glutamic acid which is the umami ingredient. It does have the great scent of wakame, but doesn’t taste like dashi.

I don’t know exactly, but I would say the reason why wakame can’t be the main material for dashi is that wakame is normally washed and dried a considerable number of times in the manufacturing process due to the purpose of eating it as it is. Perhaps, the umami ingredients contained in wakame might be washed away during those steps.
Kombu (kelp), on the other hand, is dried carefully for a long time in the manufacturing process solely for the purpose of making dashi.

Wakame is relatively inexpensive rather than kombu, and easy to use for cooking. Let’s enjoy using wakame for miso soup and fresh salad instead of using it for dashi!

7 Types of Wakame and Their Uses

What Is Rice Bran In and What Is It Good for?
10 Best Panko Bread Crumbs Substitutes
Home
JAPANESE INGREDIENTS