What Is Hijiki (Japanese Seaweed)? 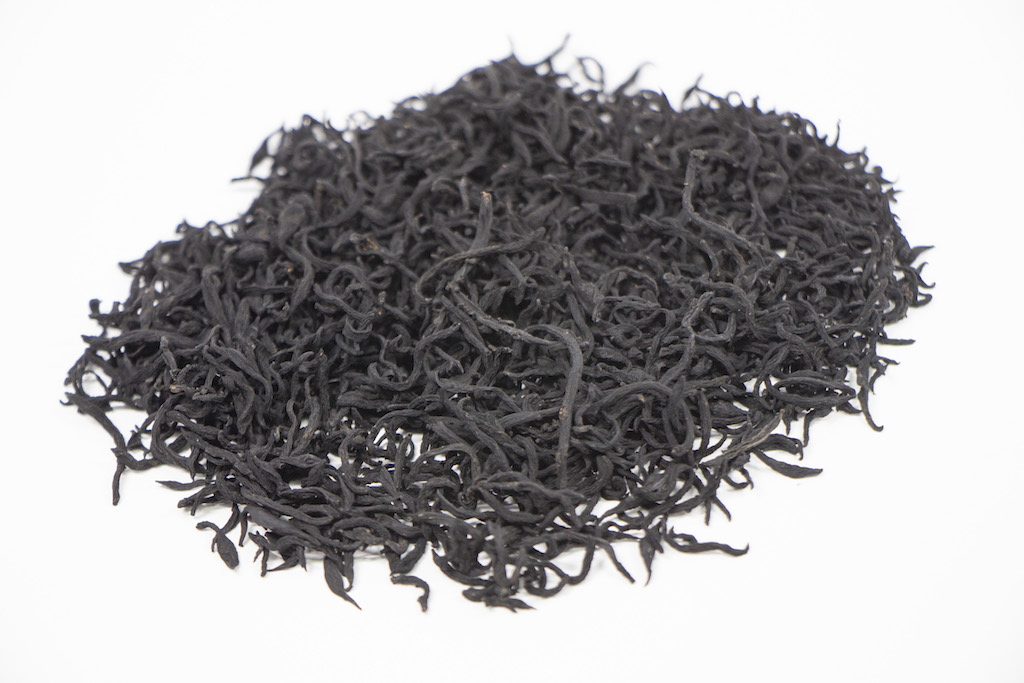 Hijiki is a type of seaweed in Japan, and mainly used as an ingredients in cooking.
It grows thickly near the rocky intertidal zone near the rough coast, and matures with sporangia from spring to early summer.
Some of them are produced in Japan, and others are imported from South Korea and China.

Hijiki is boiled or steamed first, then dried in the manufacturing process. So normally hijiki on the market is dried one. You need to soak deried hijiki in water before cooking. 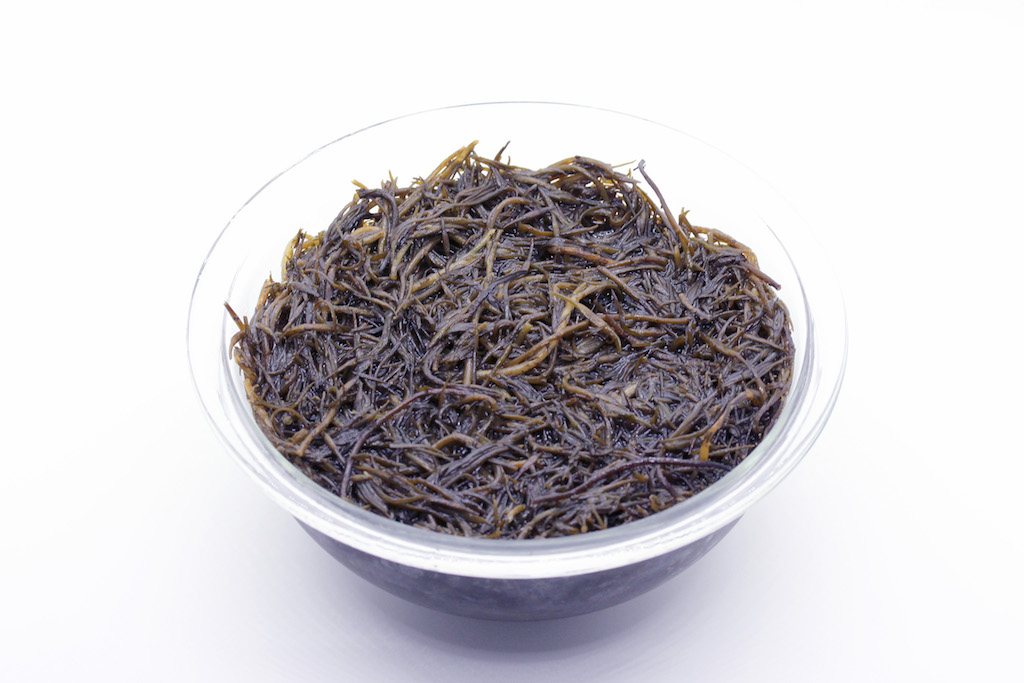 By the way, the word “seaweed” covers a lot of types of Japanese foods as followings:

Hijiki has the unique seaweed odor a little just like wakame seaweed.*
The taste of hijiki is light and simple, so it’s usually seasoned with various types of seasonings in cooking.
The texture of hijiki is soft.

*The smell is not so strong, but if you don’t like it, it’s better to soak dried hijiki in boiled water before cooking instead of a regular temperature water.

How Is Hijiki Used? 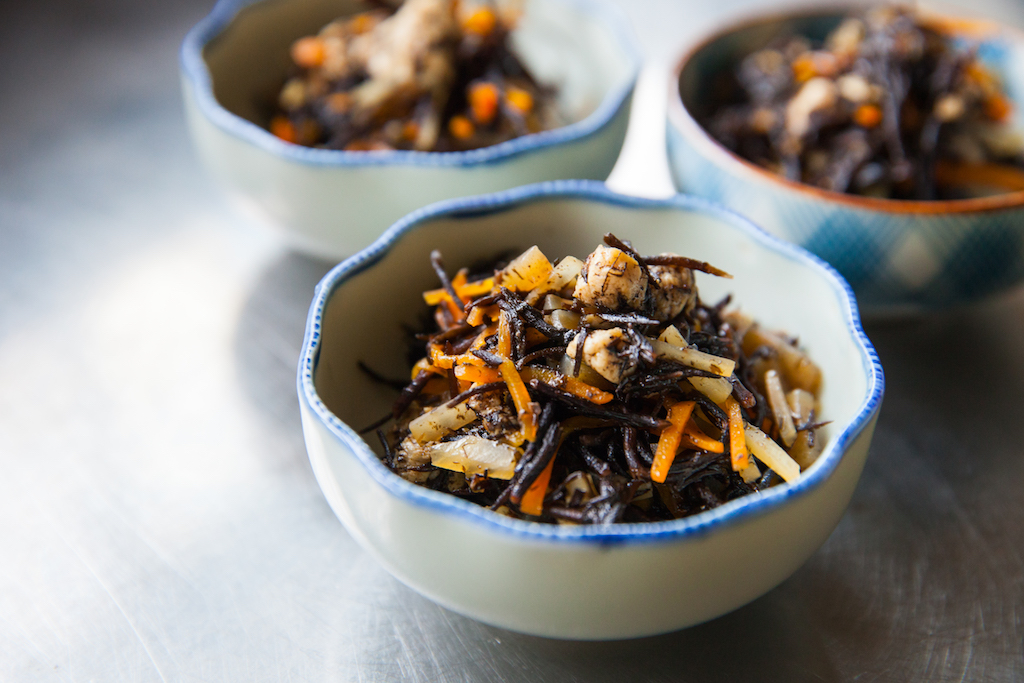 Speaking of hijiki, the most popular dish for Japanese is nimono 煮物 (simmered hijiki). It’s made by simmering hijiki with carrot, beans, and thin deep-fried tofu, and it’s seasoned with soy sauce, sugar, and dashi. Its salty-sweet taste matches so well with hijiki and other ingredients.

Simmered hijiki is common ingredient for bento box too. Other than the simmered hijiki, there are various kinds of hijiki dishes in Japan. Let me introduce other examples. 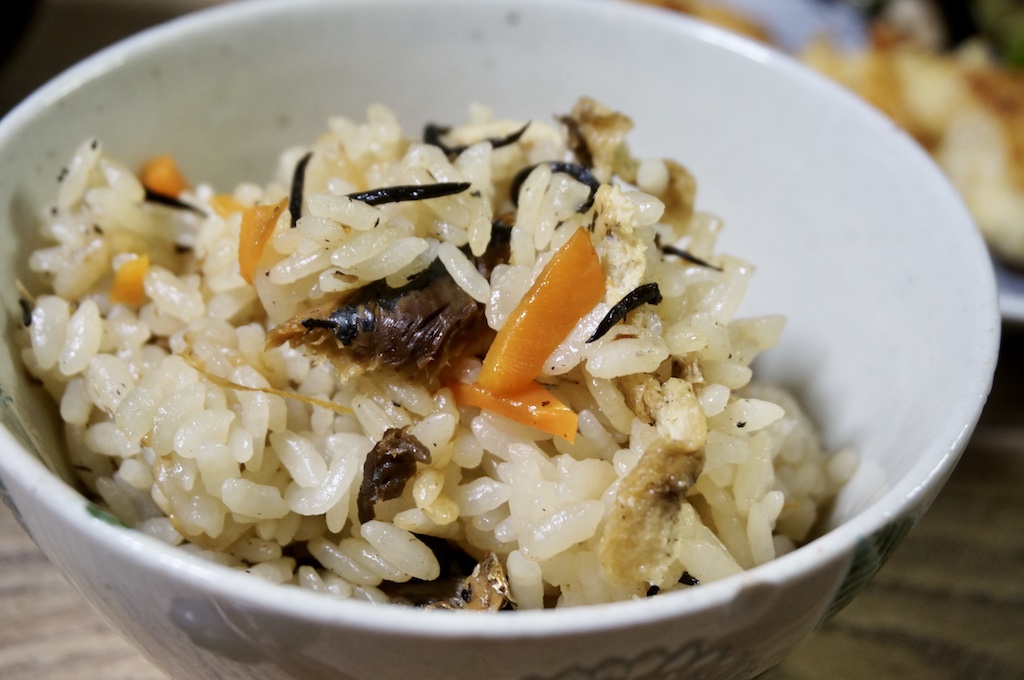 Hijiki seasoned with salty-sweet taste (just like the simmered hijiki) matches so well with Japanese white rice as well. You can make it by putting the ingredients, seasonings, and rice into rice cooker, or by mixing cooked rice with simmered hijiki. 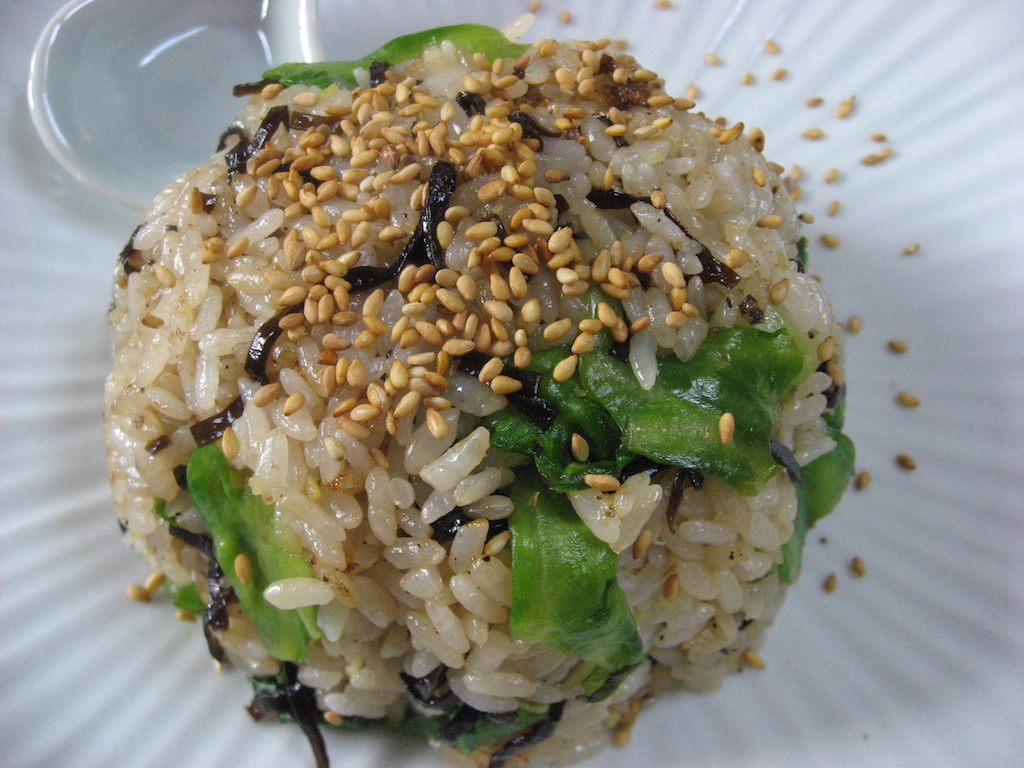 Hijiki can be an ingredient for fried rice too. Hijiki doesn’t have much taste, so it won’t ruin the flavor of fried rice. By adding a little bit of hijiki into normal hamburg steak, it becomes very nutritious steak. For even more easy way, you can mix ground meat with the simmered hijiki just like the hijiki mixed rice. 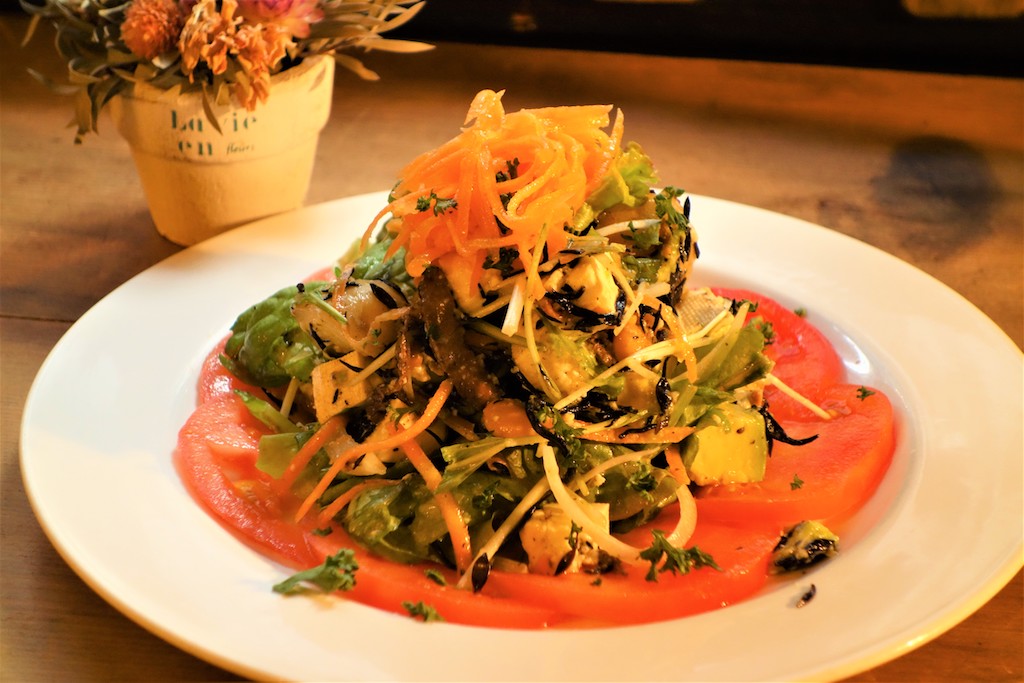 There are seaweed salad (using wakame seaweed or other types of seaweed) in Japan, and hijiki is no exception. It’s so simple to make: prepare some hijiki by soaking it in hot water, and sprinkle it on your favorite salad. It matches so well with every kinds of dressing. 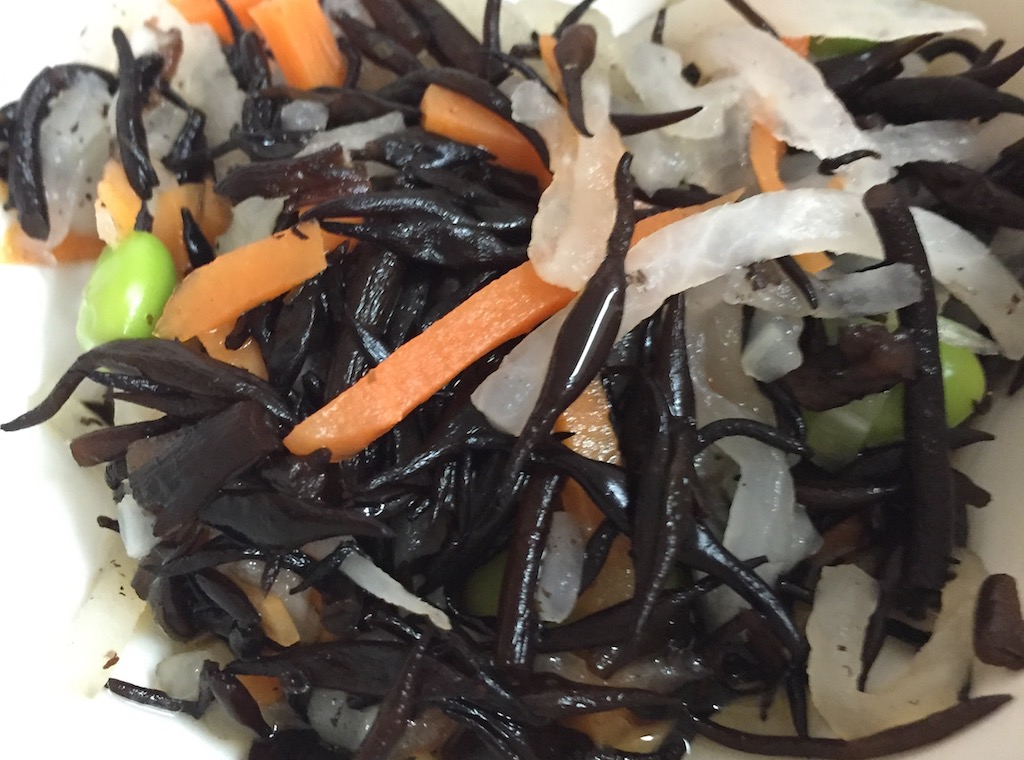 Traditional Japanese dishes like to use vinegar for various ingredients. Hijiki is also used for this type of dish. It’s kind of like hijiki salad with vinegar flavor.
You can add your favorite ingredients into this vinegared hijiki, for example, carrots, daikon, lotus roots, and cucumbers. Adding ham and some beans are also recommended. 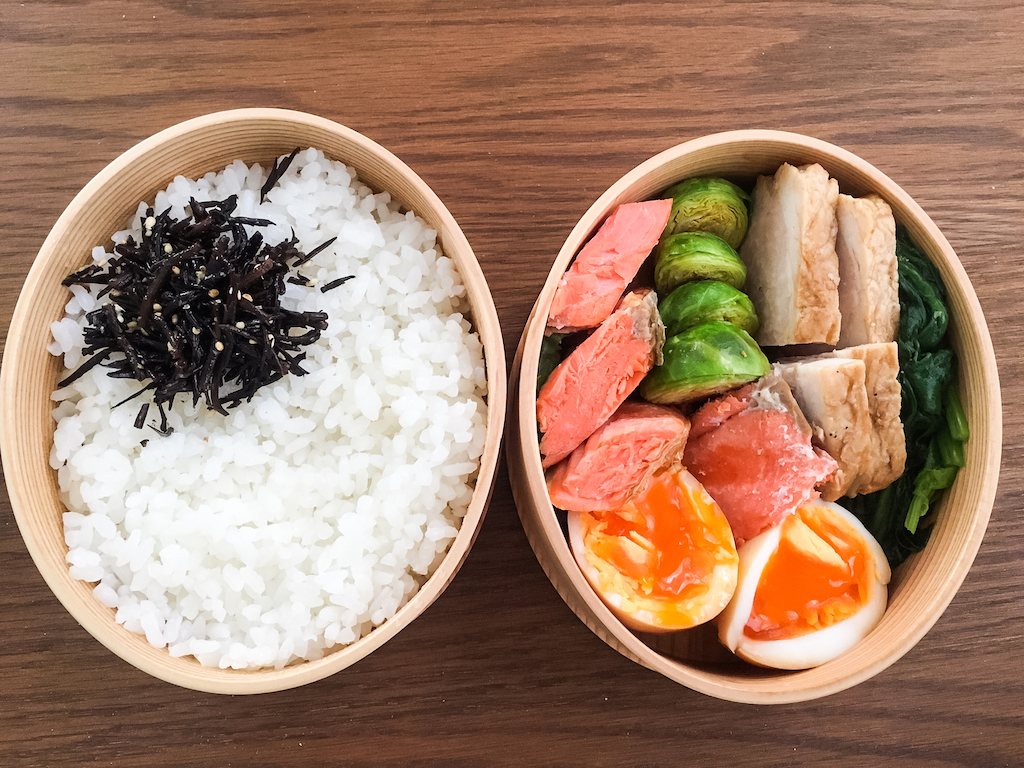 You can sprinkle hijiki as the topping on your rice. The topping is called “furikake” in Japan, and hijiki furikake is usually made by mixing it with karikari-ume (crunchy pickled plum) or shiso (Japanese basil). Then it’s seasoned with salty-sweet taste. 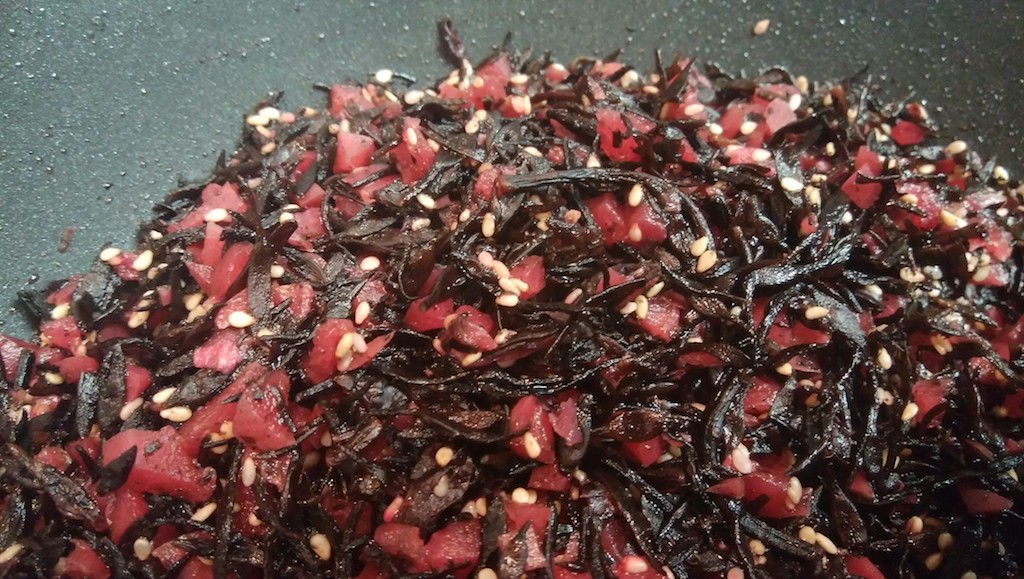 Below you will find the nutrition information for a 3.5 oz (100g) of dried hijiki:

*The amount of dried hijiki you need for one meal is about 1g (1 teaspoon) per person. And its calories should be 1.39kcal.

What Are the Benefits of Eating Hijiki Hijiki is generally known as food which is rich in iron. It’s said that abundant iron contained in hijiki is useful for cell activation and prevention / improvement of anemia.

Hijiki contains calcium abundantly too, and the amount of calcium in hijiki is about 12 times as much as milk.
Additionally, magnesium and vitamin K which helps the function of calcium are also contained in hijiki. So, you can expect that they work effectively for maintaining bone and tooth health and improving stress.

Can I Eat Hijiki Raw?

You can eat hijiki raw.
Some of you might worry if it’s ok to use raw hijiki especially when making salad or vinegared food. You can actually use dried hijiki right after you soak them in water.
That’s because hijiki is boiled (or steamed) after it’s harvested before drying it in the manufacturing process. So technically, it’s heated already.
However, it’s not always 100% sure about that (perhaps it depends on the manufacturers). If you’re worried, please cook hijiki on heat whenever you use it for dishes just in case.

What Is Yuba (Tofu Skin) and How Is It Used?
What Is Curry Roux Made of?
Home
JAPANESE INGREDIENTS