This is the Ultimate Guide to know “What are the different types of miso?”
You can categorize MISO on the basis of 3 factors:
1. Raw Material
2. Color
3. Taste 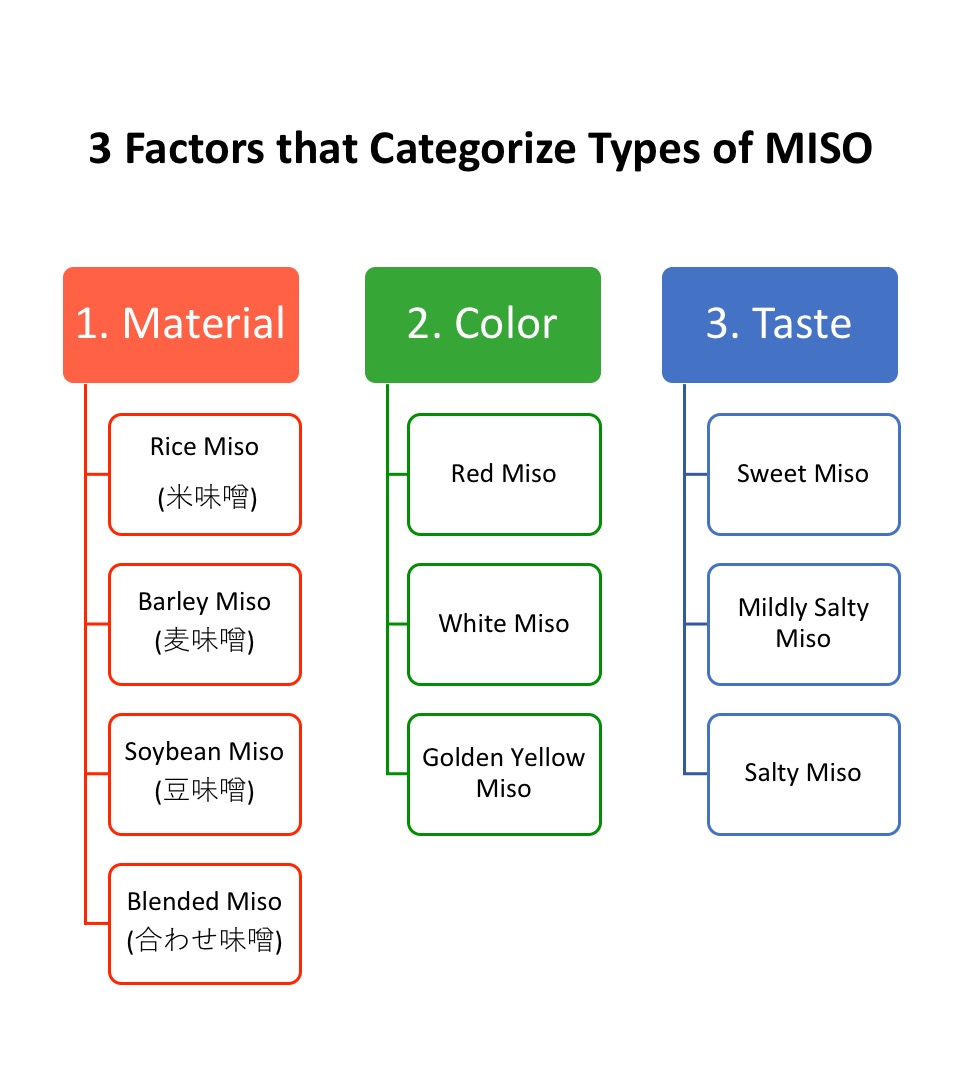 Categorize Miso on the Basis of Raw Material

Here “material” means “kind of  koji”. Miso is made from soybean, some kind of koji, and salt. Although every miso needs soybean and salt, the kind of koji could be changed. 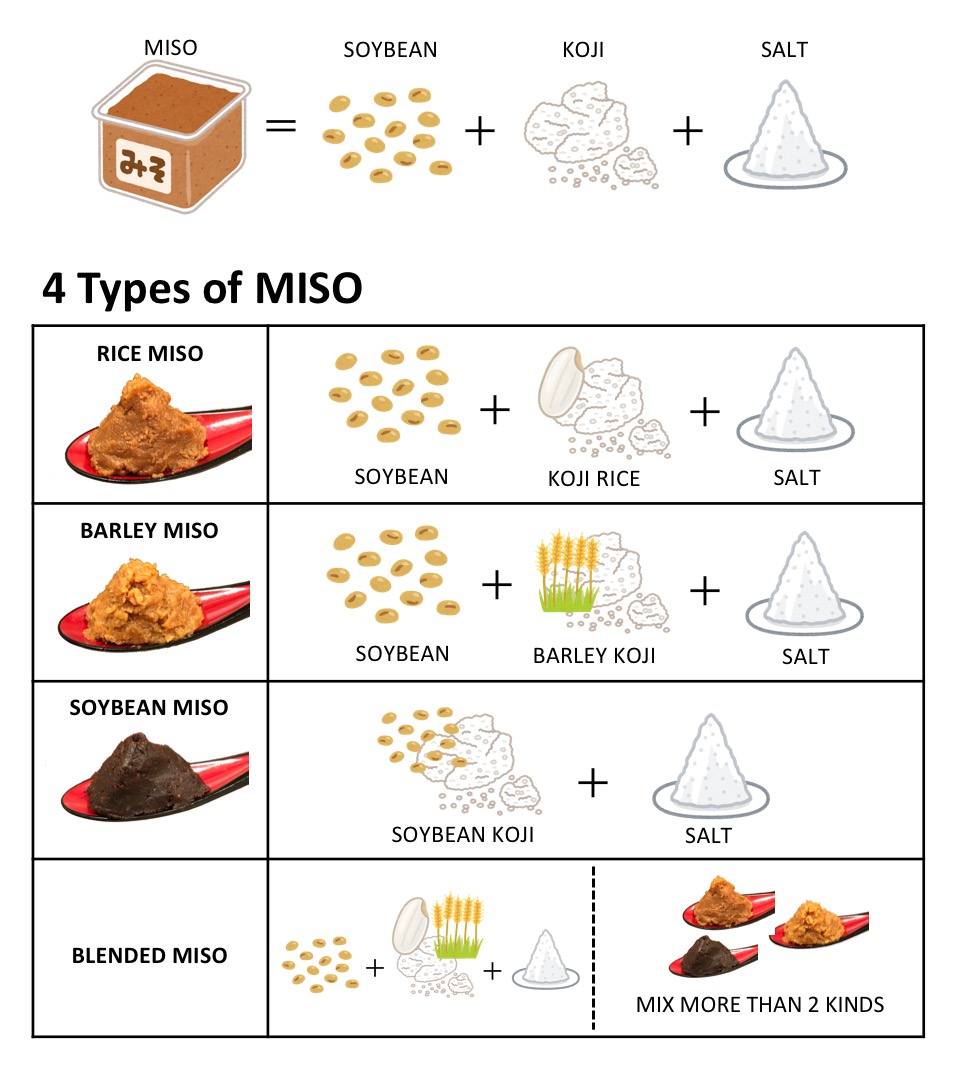 Rice miso is made from soybean, koji rice, and salt. (Mix boiled soybean + koji rice [米麹 kome-koji] + salt.)
Koji rice is made by fermenting steamed rice with koji mold (Aspergillus oryzae) attached.
80 % of miso produced in Japan is actually rice miso, and there are many different types of rice miso. The taste and color differ depending on the amount of koji rice, salt, and fermentation period. The taste could be sweet / mildly salty / salty, and the color could be red / white / whitish yellow.
Because rice miso doesn’t have too strong taste, it’s very popular and suitable for making any kind of dish in Japan.

Barley miso is made from soybean, barley koji, and salt. (Mix boiled soybean + barley koji [麦麹 mugi-koji] + salt.)
In the same way as koji rice, barley koji is made by fermenting steamed barley with koji mold (Aspergillus oryzae) attached.
The difference between rice miso and barley miso is that barley miso has light and refreshing tastes, and it has great flavor of barley.
Just like rice miso, the taste and color differ depending on the amount of barley koji, salt, and fermentation period. So there are both mildly salty and salty barley miso.
By the way, barley miso is mostly produced in Western Japan (Kyushu region and Setouchi region).

Soybean miso is made from only soybean koji and salt. (Mix soybean koji [豆麹 mame-koji] + salt water.)
Soybean koji is made by fermenting boiled soybean with koji mold (Aspergillus oryzae) attached.
Soybean miso is only produced in the specific area, Tokai region in Japan (Aichi, Mie, and Gifu prefecture). This area has the climate of high‐temperature and humidity, and miso could oxidize easily and become sour taste because of this climate. That is why they needed special method of making soybean miso which endure this unique climate.
By using their special manufacturing method, soybean miso won’t go bad under the climate, and it’s even matured for 1 to 3 years which is longer than other miso. Long aging period let miso become very dark in color, reddish dark brown.
Since it contains neither rice nor barley, soybean miso is not sweet. However it has complex flavor and umami in it. You can feel a little bit bitter taste.

Representative soybean Miso is here: What Is HATCHO MISO and How Is It Used?

Categorize Miso on the Basis of Color

It simply means you can categorize miso by its appearance color.
The color of miso differ depending on so many factors, such as kind of materials, the amount of koji, the amount of salt, whether to steam or boil soybean, aging period, how many times miso is switched the upper and lower parts in the fermentation process, etc. Even though the kind of koji is the same, the color varies by other factors. 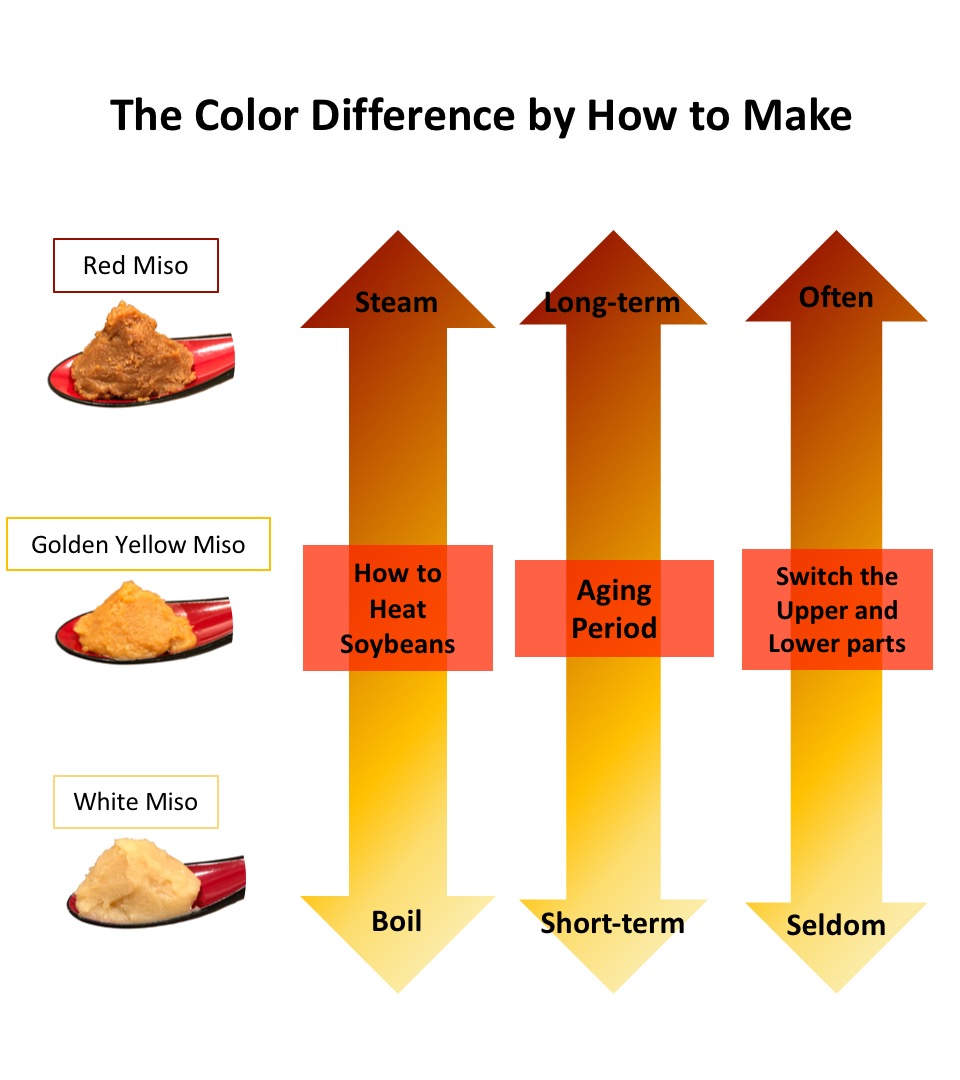 Red miso is the generic term for miso that is a dark reddish-brown (or I would say orange-brown too) in color.
No matter what type of koji is contained, it’s called “red miso” as long as the miso is reddish brown.
As you can see from the figure, basically miso matured for a longer period of time is more likely to be a dark reddish-brown in color.
By the way, Hatcho miso that represents soybean miso is one of red miso, and it’s matured for 1 to 3 years.
Typically red miso is made with steamed soybean. Due to the steaming at high temperature, amino acid contained in soybean reacts with sugar, and it turns brownish color during the maturation process.
The taste of red miso varies from sweet to salty depending on the type of koji, the amount of koji, and the amount of salt.

White miso is the generic term for miso that is white (a pale-yellow) in color.
As you can see from the figure, basically miso matured for a shorter period of time is more likely to be a pale-yellow in color.
The aging period of white miso is usually few weeks (1 to 2 weeks), could be 3 months at the longest.
Typically white miso is made with boiled soybean not steamed one. The reason is that amino acid and sugar contained in soybean which is crucial ingredient for turning miso brownish color disappear in the hot water when it’s boiled.
In addition, white miso contains comparatively large amount of koji in order to make the color white.
More koji makes miso taste sweeter by the way. And some of white miso add extra sugar in completed miso.
Representative White Miso is here: What Is SAIKYO MISO and How Is It Used?

As you can see from the figure, golden-yellow miso is somewhere middle between red miso and white miso.

Categorize Miso on the Basis of Taste

Those 3 difference in taste are caused by the difference between the amount of salt and the ratio of koji to raw soybean. If the amount of salt is constant, the more koji you use, sweeter miso you will get.
Also, miso contained large amount of koji could give you not only sweetness from koji (koji rice or barley koji) but also strong great scent of koji.
On the other hand, less koji and more soybean tend to create miso which have strong flavor of soybean, umami from soybean, and saltiness.

・Salinity: 5-7%
・Sodium per 1 Tbsp (18g): 354-496mg
・Amount of Koji: Approximately twice the amount of koji compared to raw soybean.
Although the name is called “sweet”, it’s doesn’t mean sweet like a candy. A large amount of koji smoothes salty taste, and makes it mild.
Since sweet miso contains a large amount of koji and small amount of salt, it can be fermented quickly, and needs short aging period.

・Salinity: 7-12%
・Sodium per 1 Tbsp (18g): 496-850mg
・Amount of Koji: Approximately one and a half times the amount of koji compared to raw soybean.
The taste is not as sweet as “sweet miso”, and not as salty as “salty miso”. It’s well-balanced taste.
Although the name is called “ama-kuchi” (“ama” means sweet in Japanese), it varies in taste from mild to salty.

・Salinity: 11-13%
・Sodium per 1 Tbsp (18g): 780-921mg
・Amount of Koji: A little bit smaller amount of koji compared to raw soybean.
As the name suggests, it’s comparatively saltier than other 2 kinds. You feel saltiness at first, but it has refreshing taste and umami come from protein contained in soybean.
Since salty miso contains a small amount of koji, it needs more functions of microorganisms such as yeast and lactic acid bacterium than sweet miso to complete fermentation. That means it needs long aging period.